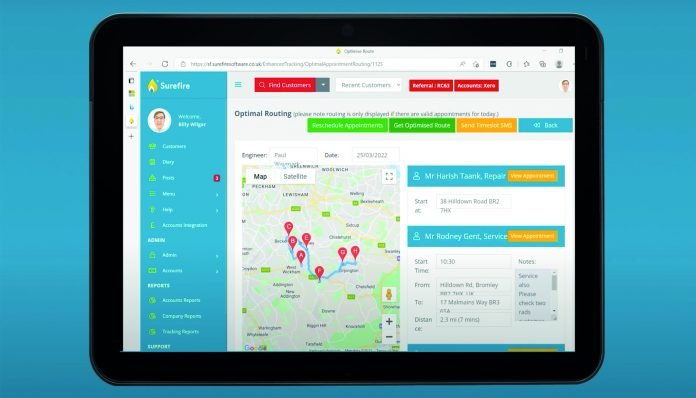 As Surefire partners with one of the UK’s leading merchants in plumbing, heating, and cooling, founder Billy Wilgar remembers how the journey of the successful software for the industry began…

Surefire is a digital job management platform designed especially for plumbing and heating contractors, and enables them to be more efficient by creating, managing, and tracking jobs, and issuing timesheets, job certificates, automated invoices, and receipts. The platform is accessible via standard web browsers or on mobile devices as an app, and users can also check merchants’ stock availability.

The company has recently partnered with Wolseley, one of the UK’s largest plumbing, heating, and cooling experts. The merchant will offer Surefire to its customers via monthly subscription plans. The exclusive partnership also offers access to Wolseley’s stock availability, proximity, and even prices live.

Surefire founder Billy Wilgar commented it is very gratifying to have Wolseley as a partner, although users can upload other merchants’ prices if they have a preference. “They researched all software planners in the UK and said Surefire was by far the best. It is a huge deal for us,” he said. “I believed in Surefire almost 20 years ago and now I have a big corporate machine that believes in it.”

From plumbers for plumbers

Originally from Newtonbreda, Co. Down, Billy is also the founder of AC Wilgar, one of the UK’s biggest domestic heating and plumbing firms, created in 1984. The software business came about in 2003 when Billy’s employees needed a tool to streamline day-to-day operational needs. “We started using an American program, Goldmine, but it was massive and hard to navigate, and terribly generic,” he commented. “We needed software that met the needs of the people in the trade directly. Our IT technician knew a younger developer and he built this little Windows-based app that worked on a palm top.”

In pre-3G times, the device used GPRS data over Bluetooth, and the first feature the company was able to offer was an installation completion certificate to the client right when the job was done.

The proof is in the awards

The difference between Surefire and the other software offerings in the industry is that it is designed from a requirement point of view. “Other developers think they know what a plumber wants and needs, but from experience, I knew what we needed,” Billy explained. In the early days, Surefire had 20 businesses sign up. These companies provided a lot of useful feedback to help develop the next versions of the software and make it even more user-friendly.

Surefire has 200 businesses registered but has never been formally launched or even advertised until recently. The software started being recognised in the industry thanks to AC Wilgar’s successful journey, having been voted the best heating installer in the UK five times. “People wondered where all those awards come from, and I’d say we had this software that communicates with the customer, to the merchant, to the manufacturer, and it’s all done seamlessly and almost unknowingly,” Billy explained.

AC Wilgar is also Surefire’s “beta client”, as all new software features are tested three months in advance by the company so that they can deal with any bugs or tweaking before going live.

Surefire offers account integration with Sage, Xero and Quickbooks. Among the features in the most recent version is a text notification sent to the client when the plumber is on route to their home. The service uses a live feed from Google Maps and shows the engineer on a live map, stating the ETA to the customer’s property, saving time and avoiding frustration.

Billy also highlights the new Booking Agent tool. It assigns the closest plumber to the client’s house and shows the engineer’s live calendar so that the client can book the service directly, without having to make any calls. The Route Optimisation tool helps the plumber can make it to all appointments in the most efficient way possible and avoids a lot of the infamous ‘when is my engineer going to be here?’ calls, as well as making significant savings on both time and fuel. 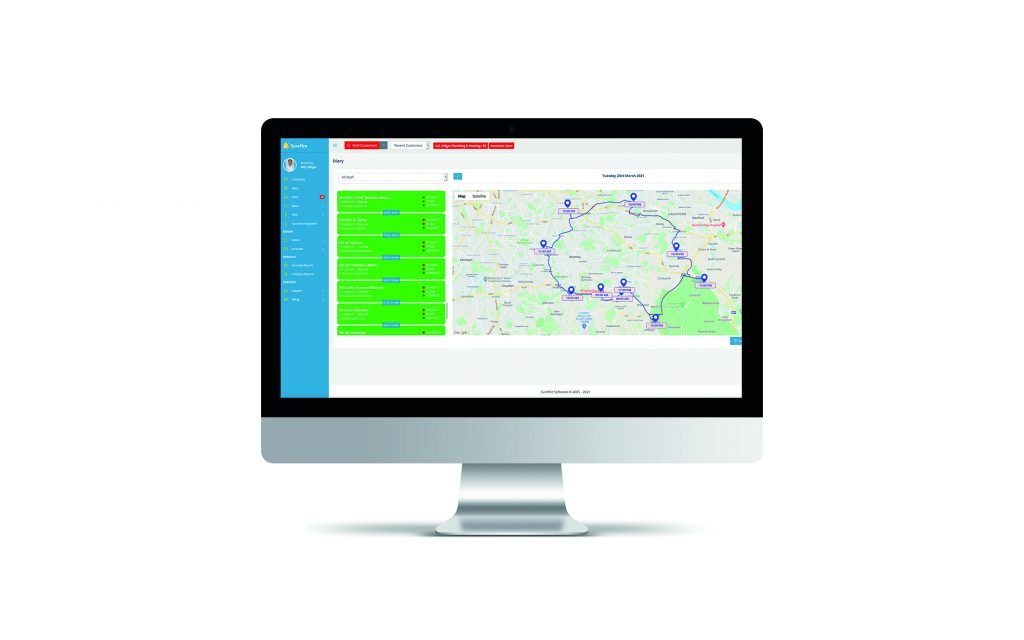 Surefire also offers two quoting tools. Quote Wizard generates bespoke and detailed quotations automatically and fills a shopping basket with all required components, providing net prices at the end of the quote. The SmartQuote plugs directly into the merchants’ database, enabling customers to create a quote online, and has displayed an amazing 68% to 70% conversion rate!

Thinking ahead, the software company is now working on an online quoting tool, instead of an estimating tool. “That will plug into the merchant’s database so the client will be able to access real prices and know their margins, which branch has the product in stock, which engineer is available, and then book the engineer for the installation,” Billy explained.

Surefire is a white-label product and its UI can be totally customised according to the client’s needs, including logos, drop-down menus, emails, and reminders. “This level of professionalism empowers small businesses to compete with big players and provides a wonderful customer journey,” Billy explained. According to the founder, Surefire will continue striving for an intuitive design and experience. “My word of rule in development is ‘Next’ and we are committed to making the software easy to use for professionals in the industry.”