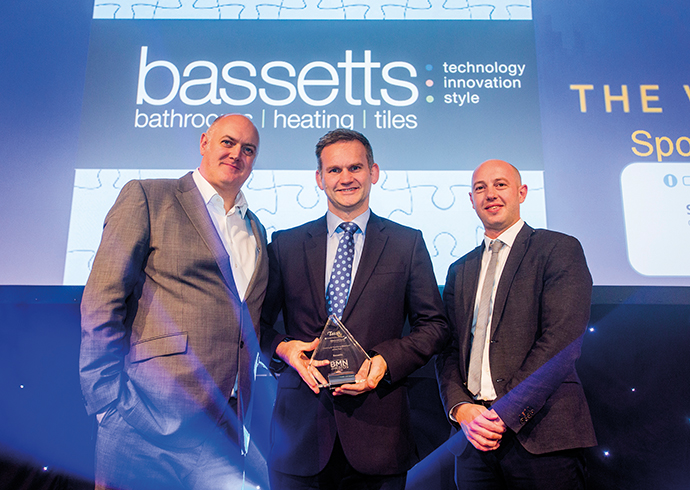 The company, which has 15 branches in the region, fought off stiff competition from national companies including City Plumbing Supplies, that has over 300 stores across the UK, to claim the coveted accolade at the UK Builders’ Merchants Awards for Excellence Awards 2016.

Now in their fifteenth year, the awards celebrate the success of the finest, most innovative and best exponents of great business practice in the building merchant industry across the UK.

This is the second time the company has won this award, after being successful in 2012 and also named as a finalist in 2014.

Managing Director of Bassetts, Alan Wright, was presented with the award by comedian Dara O’Briain at a glamorous ceremony hosted at the Hilton Hotel in London on November 25.

The judges described Bassetts as a great business that “offers the full package and which has transformed themselves over the past few years despite operating in a very difficult market”.

Alan commented, “We are extremely proud to once again have won this prestigious award and to be recognised as the best in the UK. Our company has gone from strength to strength over the past few years and recently we claimed Northern Ireland Plumbers’ Merchant of the Year for the third time.

“I would like to thank each and every member of our team as our recent success would not be possible without their dedication, commitment and excellent customer service.”

Winning this national award tops off a successful year for Bassetts which has seen the company acquire a local plumbing supplies business and invest heavily in its existing branches.

Bassetts recently acquired Portglenone-based Clady Plumbing Supplies, Mid-Ulster’s oldest plumbers’ merchant, in a move that brings the company’s branch network to 15. This followed an investment of over £500,000 in its Northern Ireland branches in the past 12-18 months, including the opening of a new ‘showroom only’ branch in Boucher Crescent, Belfast.

Work on the company’s L’Derry, Coleraine, Omagh and Dungannon branches, along with an upgrade to its Portadown showroom, has also been completed.

Bassetts has also invested in new technology, including the introduction of the Bassetts Visualiser – Northern Ireland’s first interactive touchscreen software that allows customers to choose from hundreds of wall and floor tiles to easily create the perfect look for their dream bathroom.

For more information on Bassetts, contact the company’s head office on 028 3833 9438 or visit www.bassettsonline.com