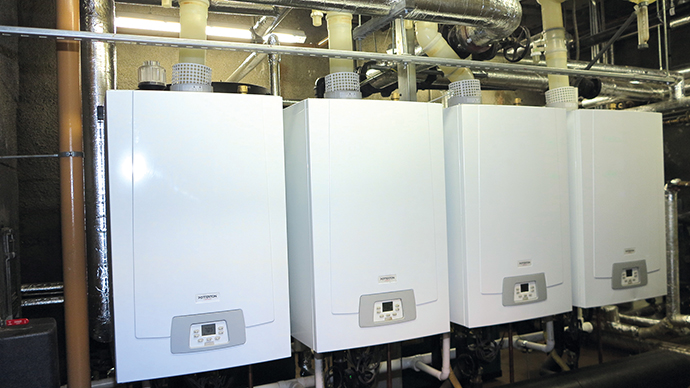 St Monica’s Nursing Home in Dublin was from suffering sky high energy bills, and so it invited the Baxi Potterton Myson team to recommend a suitable replacement for its ageing heating system.
The care home was running off two 300kW brick-lined Britannia boilers that had been converted to gas. Remarkably, both were close to 100 years old. There were also two 1,000L, poorly insulated copper hot water calorifiers that were showing signs of wear and corrosion. In fact, the estimated efficiency of the boilers was less than 50%.

Declan Mulholland, Head of Maintenance at St Monica’s, met with Richard Louth, Commercial Sales Specification Manager at Baxi Potterton Myson, and contractor Frank Daly of Glenergy. They discussed the concept of installing CHP as part of the new heating system to help reduce the nursing home’s energy bills even further.
Once funding had been secured for the project, the Glenergy team removed the old boilers. In the footprint of one of them, four Potterton Commercial Sirius Two WH110 boilers on a cascade frame were installed. The space vacated by the second old boiler was room enough for a SenerTec Dachs CHP and 900 litre buffer tank. The old calorifiers were replaced with two 500L quick recovery 1,000 litre commercial Megaflo hot water cylinders from Heatrae Sadia.

In addition to the equipment supplied, Glenergy rewired the entire boiler room, including a new supply from the main incomer distribution board and a new control panel that was purpose built for the project.
“The project went exceptionally well,” said Declan. “It was a difficult installation, as large equipment and pipework had to be removed from a below ground level boiler house, with difficult access. The down time was hardly noticeable, mainly due to the Sirius modular cascade frame that was recommended. It was easily positioned and allowed de-commissioning of the old boilers with little disruption to heating throughout the building, while other work was carried out.

“The SenerTec CHP is the heart of the system, working to 97% and providing a major contribution to our electricity usage. The four Sirius Two WH110 boilers kick in quietly, when required, and the two Megaflo cylinders ensure we always have plenty of hot water. The whole plant works seamlessly.
“We estimate the system will have paid for itself in three to four years. I would highly recommend this installation to any nursing home thinking of upgrading – it’s a no brainer!”
This was a major project in a sensitive environment. St Monica’s Nursing Home has many elderly residents, who are lovingly cared for by wonderful staff, and it was important to ensure constant heating and hot water could be provided. Frank Daly of Glenergy, Baxi Potterton Myson’s Senertec Partner in Ireland, kept Declan informed of progress at all times.

Declan added, “I even got progress calls over the weekend as the team worked tirelessly to complete this project on time. I was very happy with the level of guidance and support that I got from Glenergy and Baxi Potterton Myson. Commissioning was carried out by Damian Delaney, Baxi Potterton Myson’s Technical Support Manager. Everyone was totally professional, from our initial meeting and right throughout the whole project.”
Richard Louth of Baxi Potterton Myson said, “This was an important project for us. Declan put his trust in our recommendation. It started as a burner changeover and developed from there. It was also our first time working with our SenerTec partner, Frank Daly of Glenergy. No outside parties were involved – everything was in house. The synergy between both companies works very well, and we now have more projects in the pipeline.”

The SenerTec Dachs CHP is designed for larger residential buildings or commercial premises. It uses an internal combustion engine that can be fuelled by either natural gas or LPG to produce heat and generate up to 5.5kWh of electricity, which can be used in the building.
The Potterton Commercial Sirius two WH is available in outputs of 50kW, 60kW, 70kW, 90kW and 110kW. It has a 9:1 modulation ratio making it extremely energy efficient, saving money and reducing carbon.

Megaflo commercial cylinders from Heatrae Sadia are designed to meet all current safety, performance and quality legislation. They are available as direct, indirect and solar models, and from 400 litres up to a massive 2,500 litres.