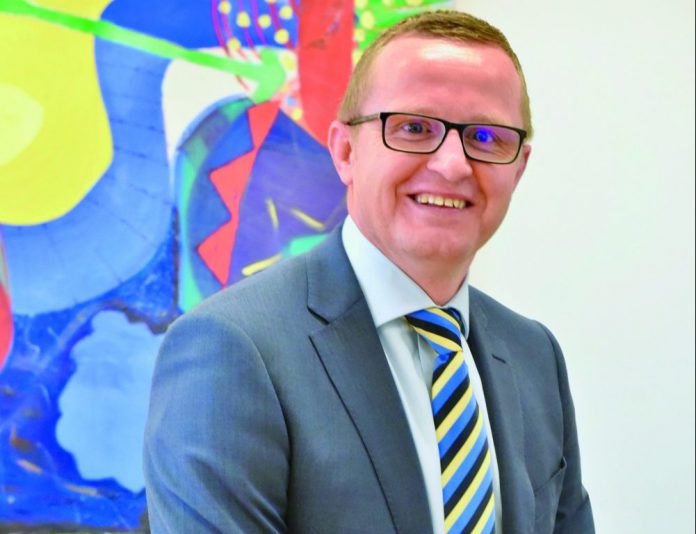 “At that time, I had aspirations to open my own menswear store, but Phoenix Natural Gas was new on the scene and there was a lot of excitement around the prospect of natural gas as a heating fuel in Northern Ireland,” he explained.

“I was impressed by the company’s strong performance and growth and I was attracted to the opportunities the
company offered within their sales department, so I joined the Phoenix team in 2002 as a Domestic Energy Advisor.

“The transition from working in a high- end clothing retailer with an established customer base to driving sales within
a high growth utility industry was challenging at times. Phoenix Natural Gas had built a recognisable brand, but its offering was largely unknown and home-owners were unfamiliar with the benefits of installing natural gas.”

This presented a real challenge for Neil in terms of ‘the sell’. “There was still a large education piece around natural gas as a fuel and how this would bene t the customer, so the role was in large part focused on cold calling and lead generation.

“In those days, it took an average of three home visits for a customer to connect to the natural gas network and there was a certain sense of nervousness around being among the first to switch to this new fuel.”

Fast forward 20 years, and Phoenix Natural Gas has built its customer base to over 200,000 in its licence area of Greater Belfast and Larne, made gas available to over 50% of the population of Northern Ireland and established natural gas as the fuel of choice.

“These days, our growth is largely organic and this is in large part due to the high customer satisfaction with natural gas – over 90% of home- owners who recently installed natural gas say they would recommend it to friends and family. It’s easy to see why natural gas is the fuel of choice in Northern Ireland and nowadays, the benefits of switching to natural gas are well known amongst the customer base.

“With increasing emphasis on household efficiency, home-owners also have a keener awareness of their boiler performance, which accounts for up to 60% of home energy bills. Natural gas users enjoy positive efficiency benefits, with new ‘A’ rated natural gas boilers operating at over 90% efficiency compared to an older boiler over 15 years old.

“This trend for increasing consumer awareness, coupled with government support through social schemes, such as the Boiler Replacement Allowance and Affordable Warmth scheme, has consistently helped to drive connection rates and establish Phoenix Natural Gas as the largest gas distribution business in Northern Ireland.”

With the company now entering its third decade in Northern Ireland, Neil’s recent promotion to General Sales Manager reflects the changing needs of the business.

“With a segmented customer base, the role presents a different kind of challenge. We are working within a more mature market and the aim for us now is to sustain growth levels and encourage connection from a potential customer base of over 110,000 properties in the original licence area,” he explains.

Coupled with that, the company is once again at the forefront of construction, having embarked on an extension project to bring natural gas to a further 28,000 properties across 13 new towns in County Down over the next few years.

“In 2017, we have connected the towns of Ballygowan and Hillsborough and this has opened up a new customer base for us to build our brand and establish ourselves as the fuel of choice in these new areas. The approach to each new town we connect is bespoke and our strategy
is reminiscent of the early days when Phoenix was new to Northern Ireland. “We realise this is not a ‘one size fits all’ sales approach and that there is a lot of work to do in these areas in terms of householder education and connecting with the community as a company. “

Neil added, “As this project gains momentum, we expect to see strong growth in connections and we are delighted that this will have a positive effect on the wider natural gas industry, which has always been a focus for Phoenix.”

Neil remains a rm believer that relationships are key to success.

“A key part of my role as General Sales Manager is to maintain and develop relationships with the trade and we very much see ourselves as encouraging an independent industry to upskill, invest and become part of something very exciting in the energy market here in Northern Ireland.

“It’s fantastic to see the growth in the industry over the years, with some 3,000 people employed in the gas industry and over 300 local businesses established across the province, including merchants, retailers, manufacturers and installers. Maintaining that personal relationship with industry members has undoubtedly helped in building the industry to what it is today, and it is undoubtedly going from strength to strength.

“It’s a good time for the gas industry – with a buoyant market and another busy winter period approaching,
it’s clear to see that upgrading to natural gas is still the ultimate home improvement for home-owners across Northern Ireland.”