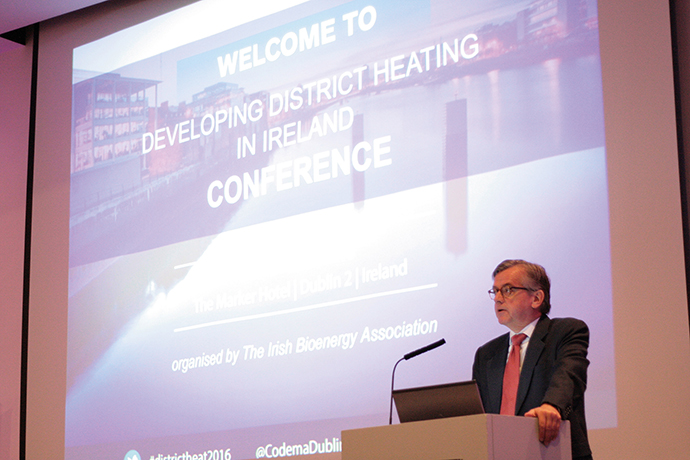 That was the message from the Sustainable Energy Authority of Ireland’s Chief Executive, Jim Gannon, who was one of the many speakers addressing a full house at the Developing District Heating in Ireland conference.

Over 170 guests, ranging from planners, local authority staff, academia and the energy industry gathered at the recent conference in the Marker Hotel, which was organised by Codema on behalf of the Irish Bioenergy Association.

The aim of the conference was to highlight the important role that district heating can play in reducing carbon emissions across the heating sector in Ireland. District heating distributes heat through a network of insulated pipes and can typically provide space heating and hot water to residential and commercial buildings far more sustainably and economically than traditional methods using gas or oil.

Ireland has typically lagged behind with this type of technology compared to other European countries, where district heating networks are widespread.

The conference heard from the Danish Ambassador to Ireland, Carsten Sondergaard, and Morten Duedahl of the Danish District Heating Board, on how Denmark has successfully implemented district heating networks across the country since the oil crisis in 1973.

Codema’s Donna Gartland gave the results of a soon-to-be published study on district heating in Ireland and addressed common questions about the feasibility of this type of technology, while Tom Bruton of the sustainable energy consultancy BioXL presented current and future district heating case studies in Ireland, such as the successful case study involving Kerry County Council and many of the hotels in the Killarney region.

The conference was wrapped up by Laura Walsh of Dublin City Council, who gave an update on the Dublin District Heating System in the Docklands. This part of Dublin city is highly suitable for this type of technology, and when completed, the project will be the largest district heating network in the country.

The presentations from the conference are available to download from www.codema.ie