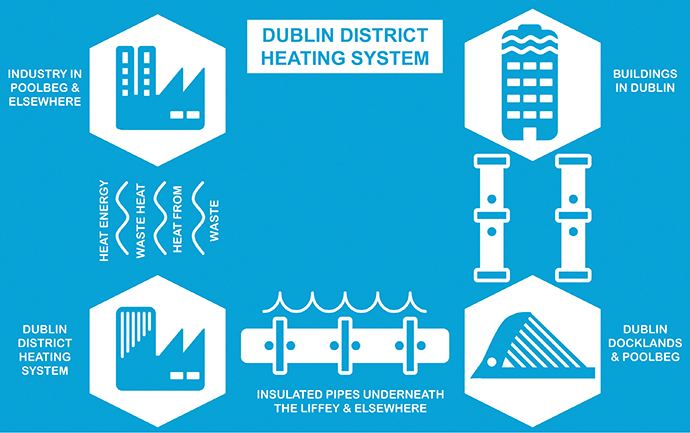 Part of an overall €11.5million project to develop district heating across North West Europe, Dublin’s participation will involve an initial project connecting the Council’s headquarters at County Hall with Tallaght Hospital. Called HeatNet, the Europe-wide project consists of 14 partners across five countries and is expected to bring over €1.5million worth of funding to Dublin.
Lead partner on the Dublin project is energy agency Codema. Funding will support South Dublin County Council in developing Dublin’s first large-scale public district heating network, which is expected to save South Dublin County Council up to 8,900 tonnes of CO2 per year, the equivalent of taking 1,700 cars off the road. Tallaght Hospital is expected to play a major role in supporting the project and there’s also potential for other businesses and buildings in the area to link up with the heating network as it rolls out.

District heating utilises waste heat from sources such as electricity generation through a network of insulated pipes and can typically provide space heating and hot water to residential and commercial buildings far more sustainably and economically than traditional methods using individual gas or oil boilers. The new EU heating and cooling strategy has identified district heating as a key technology to lower carbon emissions in the heating sector but the method has yet to be established in Ireland.
According to Codema, district heating could play an important role in the decarbonisation of Ireland’s heating sector. Retrofitting a district heating system into an existing building replaces the existing gas or oil boiler which may be old and inefficient. The building owner no longer has to worry about the efficiency of their own heating plant, as heat energy is delivered directly to their system through a heat exchanger.

District heating also allows a broad range of energy generation technologies to work together to meet demand for heat, enables fuel flexibility, lowers cost of fuel generation and dramatically increases fuel efficiency through use of CHP.

The HeatNet project will promote the roll-out of the most advanced form of this technology, known as 4th Generation District Heating, which integrates heat, electricity and energy storage to achieve an overall smart energy system. This system combines high energy efficiency, high shares of renewable energy and waste heat resources.

Commenting on the project, Codema Director, Gerry Wardell, said, “Up until now, waste heat from the generation of electricity has simply been dumped – mostly into Dublin Bay – but HeatNet presents a great opportunity to go straight into a 21st Century energy system.”

Eddie Conroy, County Architect with South Dublin County Council, added: “We see district heating as the key to lowering carbon emissions in Ireland’s heating sector, and by linking up with other public sector organisations such as Tallaght Hospital, we can make an even greater contribution towards meeting our national and EU targets.”

HeatNet will also include Dublin City Council as an associate partner while the project will support the feasibility of other district heating networks in the Dublin region. The project will run up until 2020 and will receive European Regional Development Funding through the INTERREG North West Europe programme.