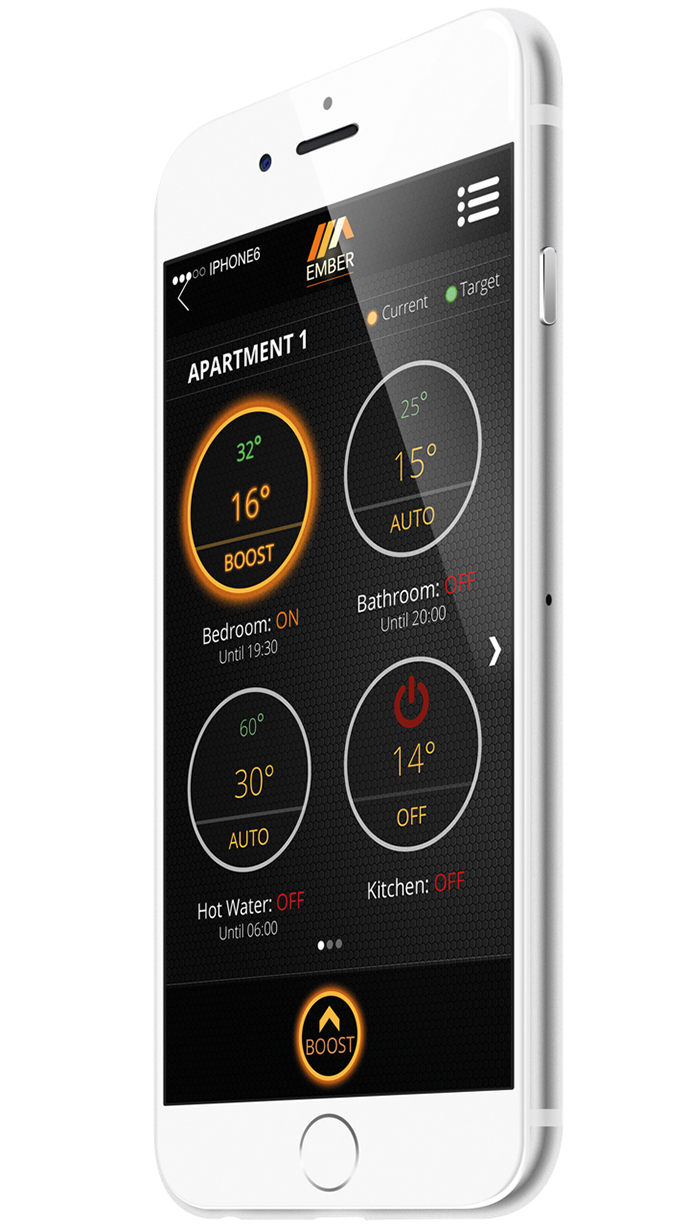 Unlike similar products on the market, the EMBER app allows the user to do so much more than just change the temperature of their heating and hot water zones.

Paul Mulcahy is Manager at EPH Controls and he highlighted how the team has been working on the app for the past 18 months.

“This is the first app we’ve launched and we’re extremely proud of how it works,” he said. “We think buyers will find it extremely easy to use. We’ve been conceptualising and developing this project for more than a year; we feel we’ve gotten all the components right.”

Users of the app will be able to log into their heating system and control their heating zones and hot water, via their smartphone, from anywhere in the world. Currently, up to four zones can be controlled by the app through integrating a four-zone RF programmer, four RF thermostats and a WiFi gateway.

RF thermostats are available from EPH Controls in room thermostat and cylinder thermostat versions, with a cable sensor. This is set to expand to 16 zones over the coming months with the introduction of individual radiator controllers. This will give users even more choice when it comes to controlling their home heating options.

All of the radio frequency (RF) components in the house talk to each other and to the internet gateway. It is the gateway that makes communication with the outside world possible via your internet router.

The reason we went with RF components in the house is that RF has far greater penetration of walls and a far greater transmission distance than WiFi.”

MULTIPLE HOMES
Unlike other apps on the market, EMBER also allows the user to control multiple homes at the same time.

“So if you have a holiday home or a rental property, you can control these while also controlling your own home,” said Paul. “If you want to keep an eye on the temperature of your mother’s house at the same time you can, while limiting the functionality of the app to particular users means only certain people will have permission to change the set heat schedules.

“For example, parents in the home could be admins, meaning they have all the privileges and rights when it comes to controlling the heating and hot water. The kids might be given permission to boost the heating but they can’t change set schedules.”

According to Paul, the app could prove particularly useful for landlords with multiple apartments, allowing them to keep an eye on their properties and turn the temperature down if needs be. An activity log keeps account of all changes made so admin users can keep track of temperature changes etc.

The EMBER app’s user interface is simple, ensuring that the user can easily navigate through the various options. Set-up is also very easy, as the gateway will automatically identify the RF components in the house and populate the app accordingly. The user can then rename the zones and control both times and temperatures.

No previous knowledge of computers or firewalls is needed to set the system up in a typical household environment. A few simple button presses is all it takes to pair the whole system up.

The company recently introduced a new boost button on their thermostats meaning that, if the programmer is timed off, the boost button on the face of the thermostat will allow the user to boost the heating for one, two or three hours directly from the thermostat. This function was added based on market feedback from users and, according to Paul, since its introduction the response from users and installers alike has been very positive.

The EMBER app is available for use with EPH Controls’ new generation of RF products.

“We refer to them as our WiFi-ready products,” he added. “We’ve just finished all our in-house testing, so we’ll be launching EMBER in June.”

The company also aims to launch a radiator controller in the autumn.

“Via the app, you’ll be able to control every radiator in your house and have individual temperature control in every room. Up to 16 battery-operated radiator controllers can be controlled via a single EMBER app, giving home-owners a very thorough level of control in their home, with the subsequent energy-saving benefits this will provide.

“That’s the next step, and we’re hoping that our extremely accessible user interface will translate to this controller, making the entire process very easy for the end-user.”

Complete packages will also be available and will include motorised valves so the installer will have all of the components required to upgrade a home’s heating controls in just one box.