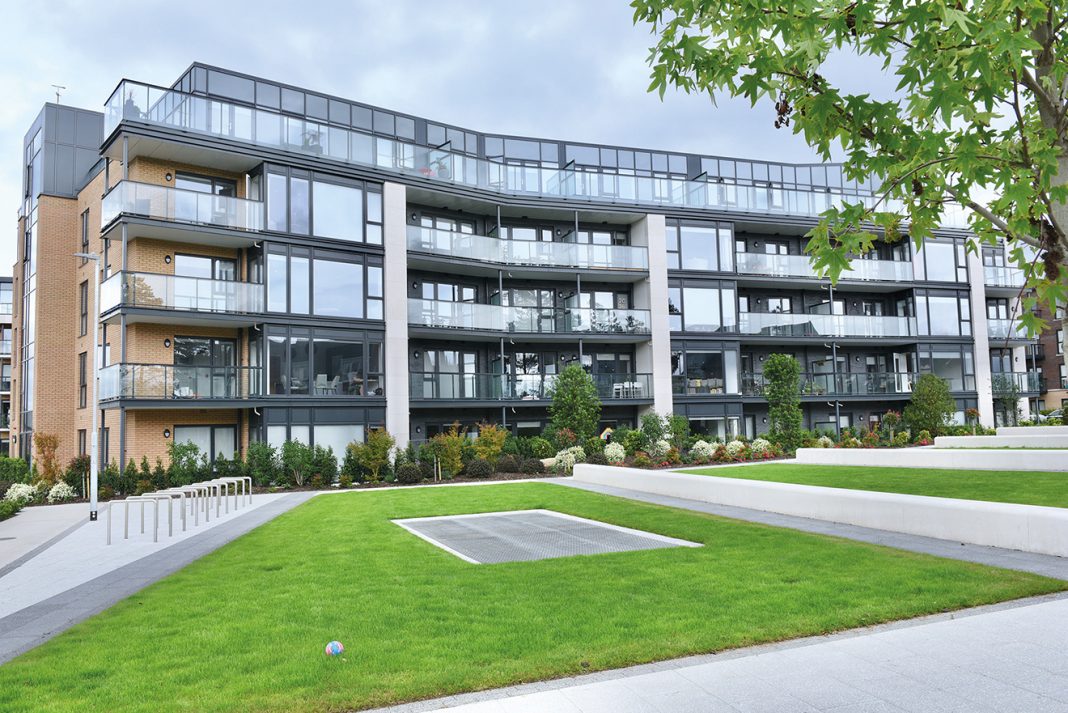 On their first nearly zero energy building (NZEB) job, the formidable team at Kerrigan Mechanical smashed their 12 month schedule to deliver an energy efficient district heat system to 214 luxury apartments at Fairways. Proof that the County Meath M&E contractor is fit and able to accommodate the largest most demanding installation jobs.

Adam Dent, Project Manager at Kerrigan Mechanical, alongside Site Manager Owen Keating and the rest of the team were tasked with delivering an energy efficient heating system that would achieve the current guidelines of a NZEB. The brief was to keep the heating system centralised via one plant room then distributed throughout the block of apartments – with each apartment billed individually for the amount of energy consumed.

The package of works at Fairways consisted of the full extent of mechanical work. In addition to the heating system this included fire fighting dry risers, passive rated ventilation and air-conditioning to the gym and concierge areas as well as waste and rainwater piping. 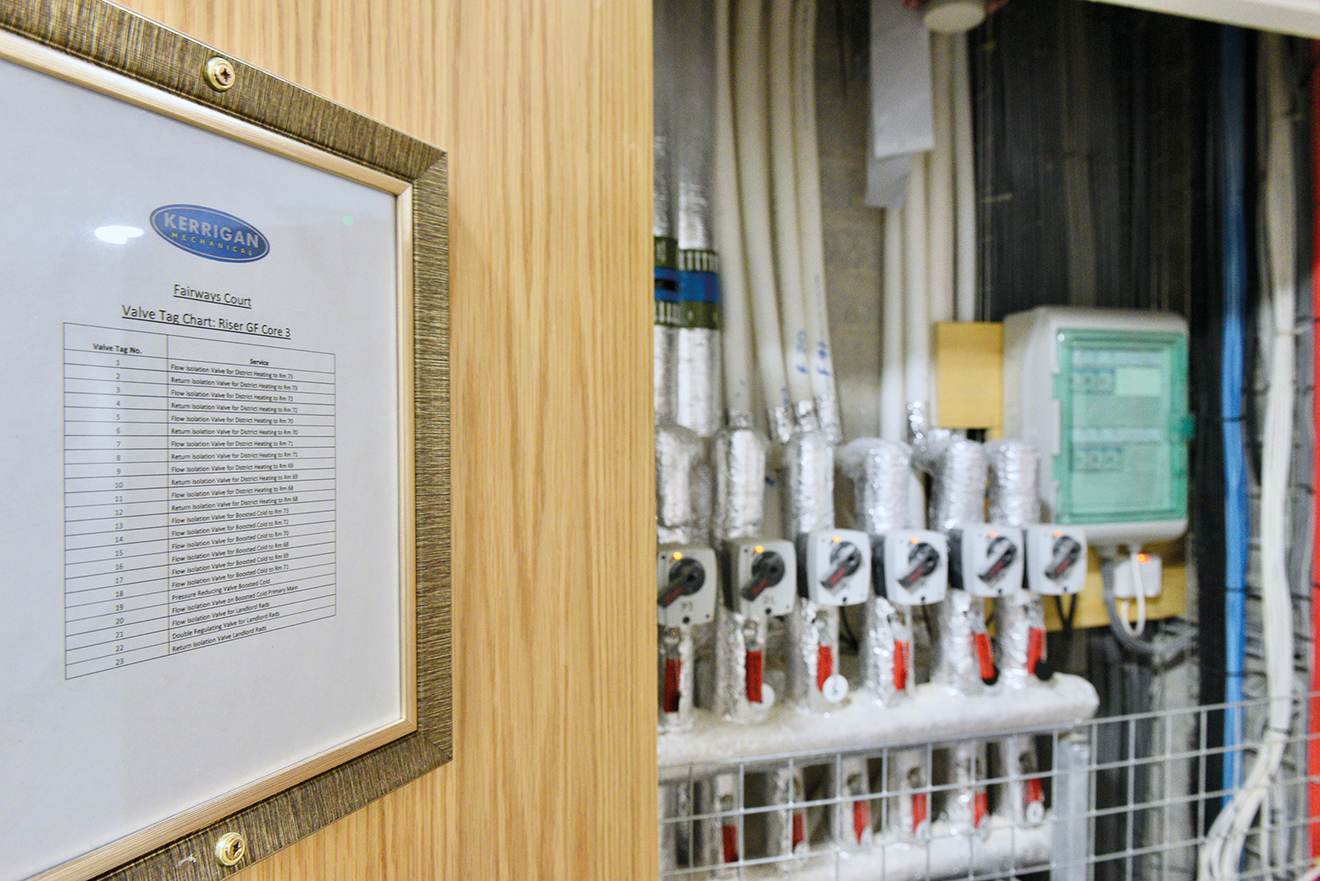 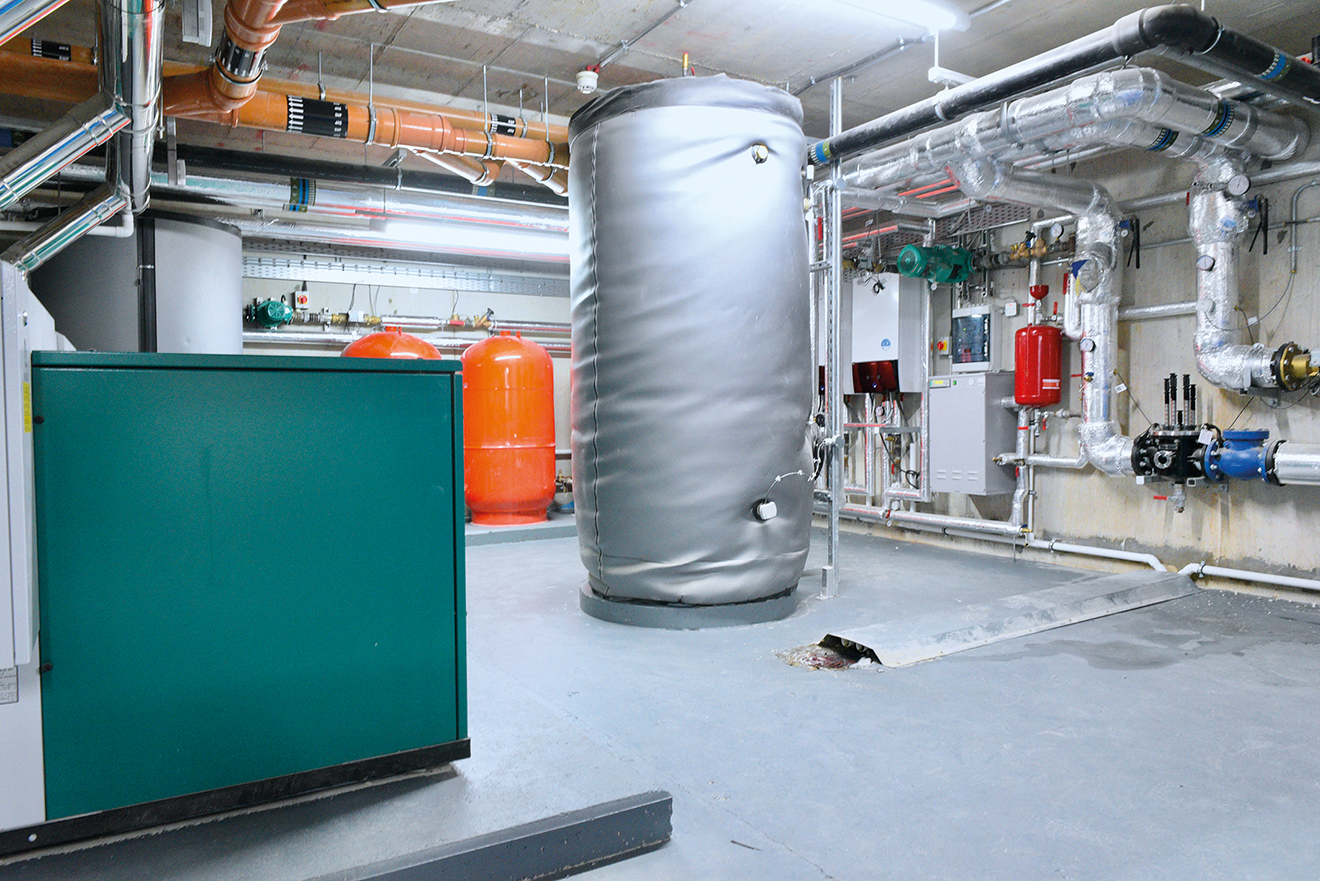 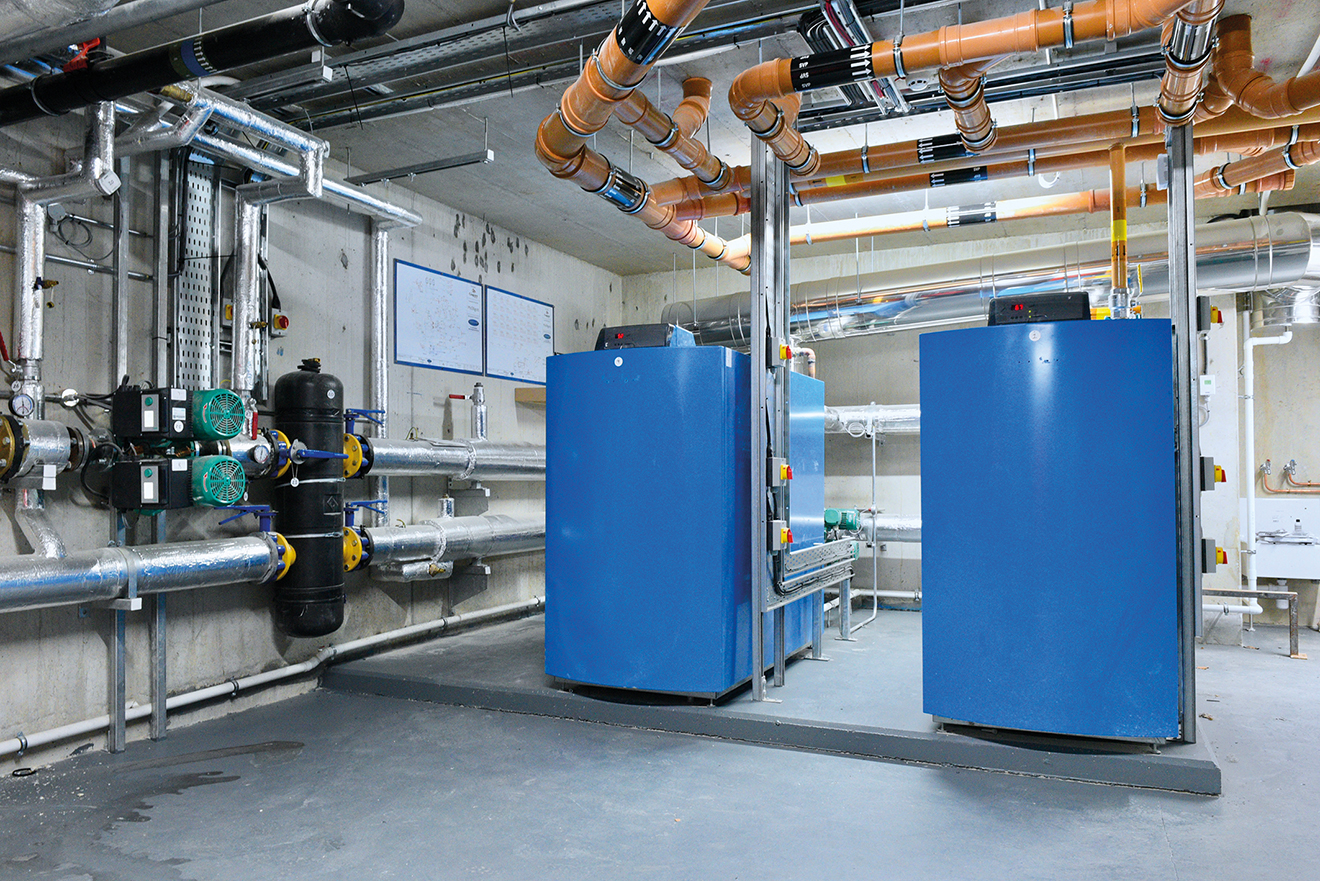 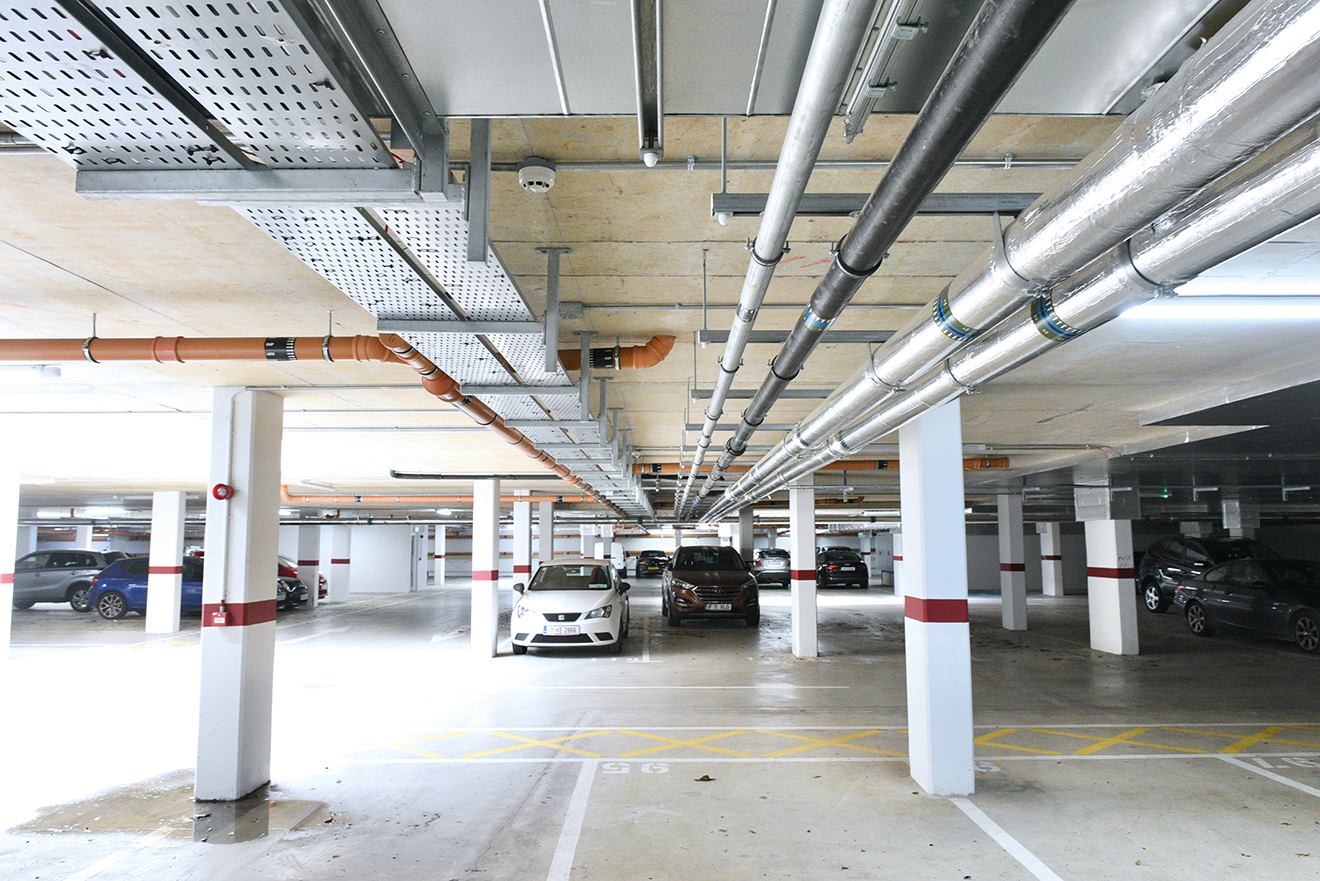 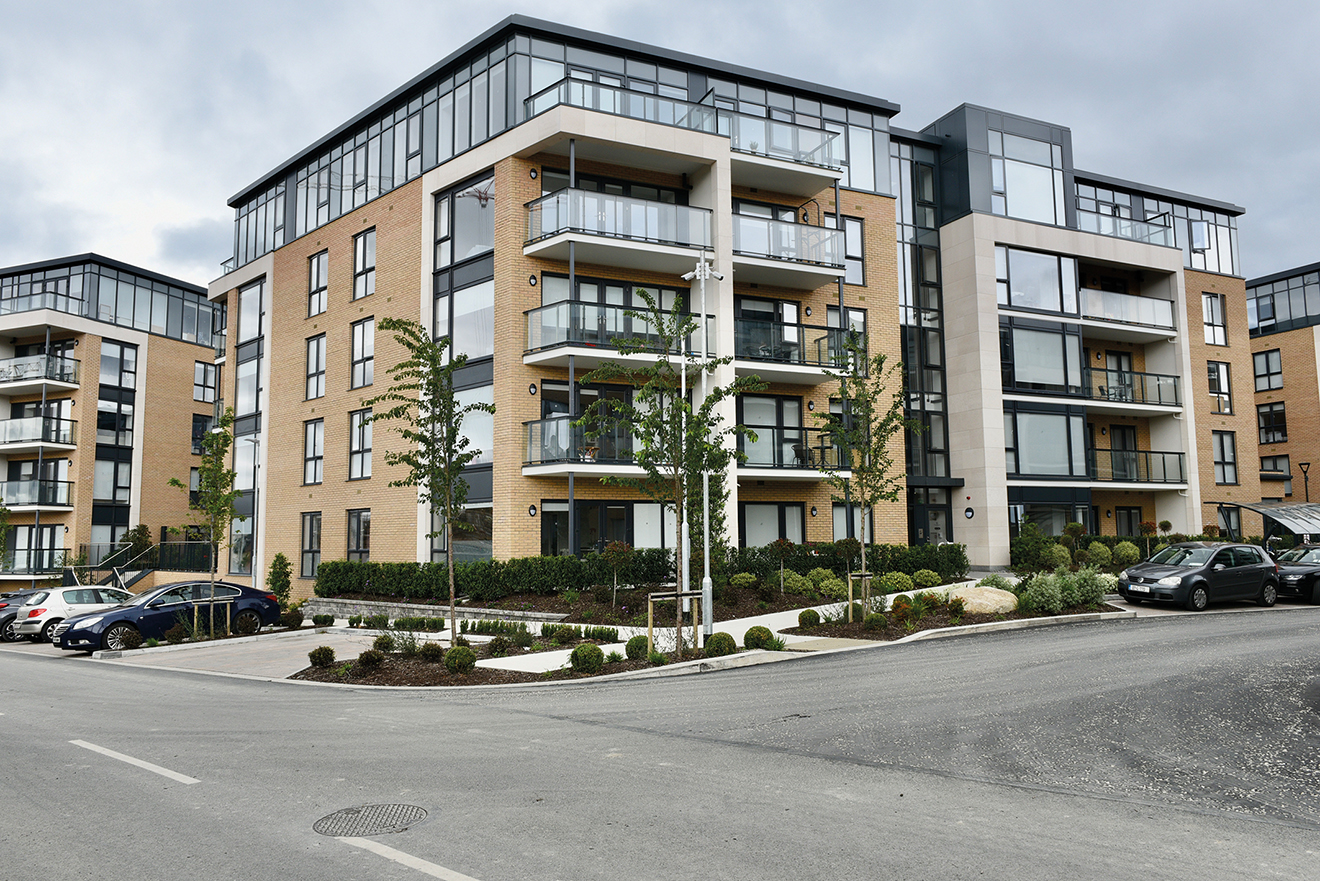 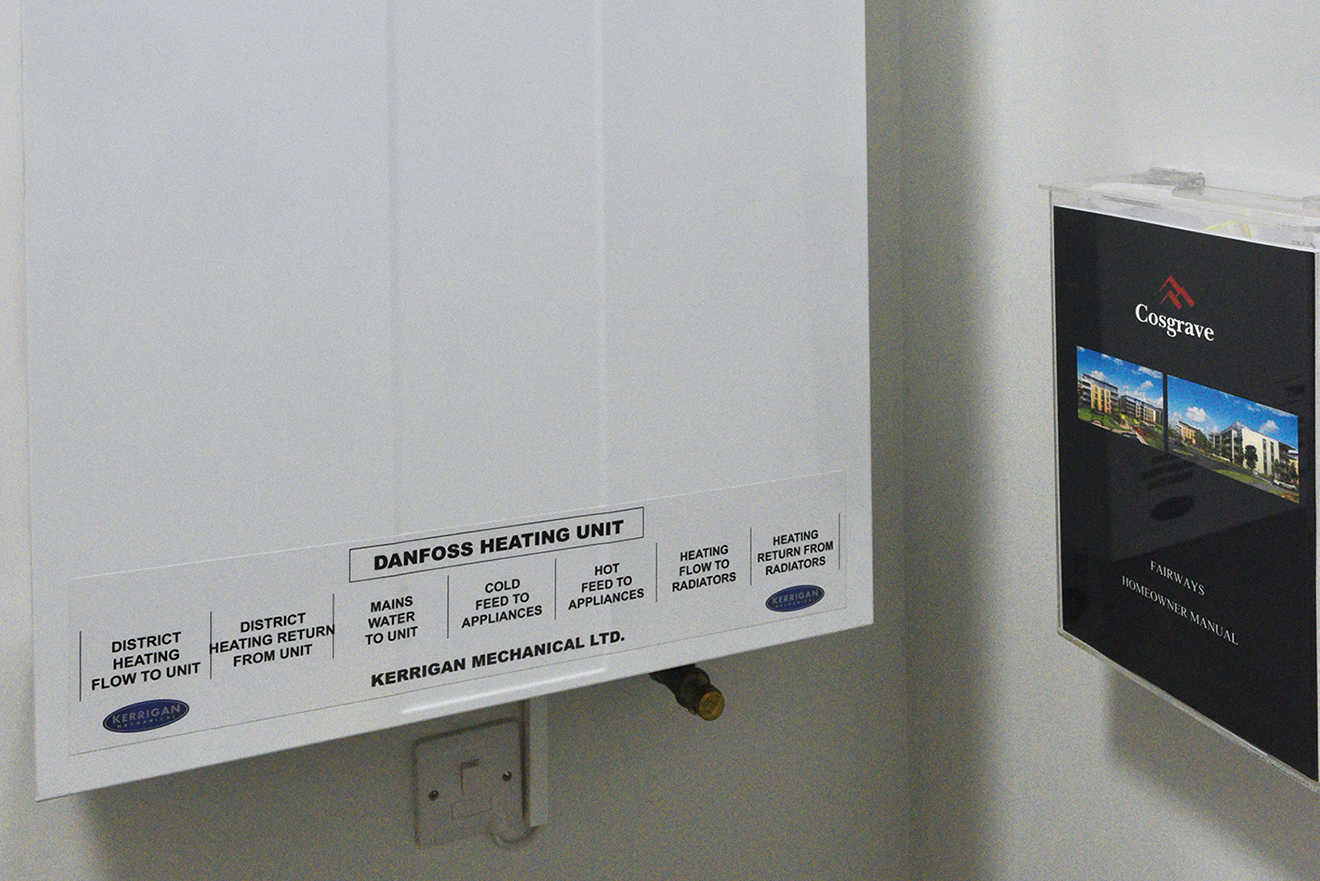 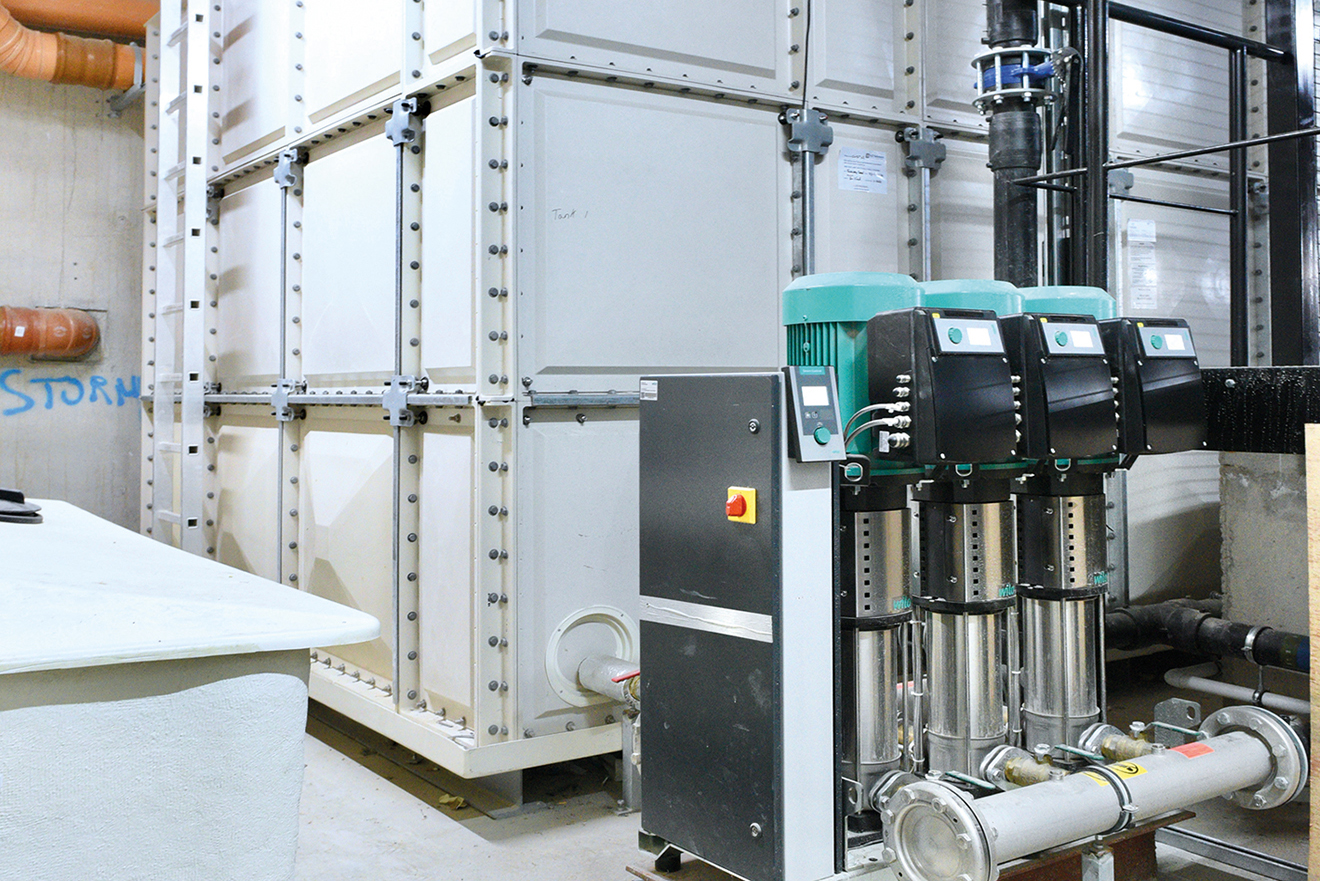 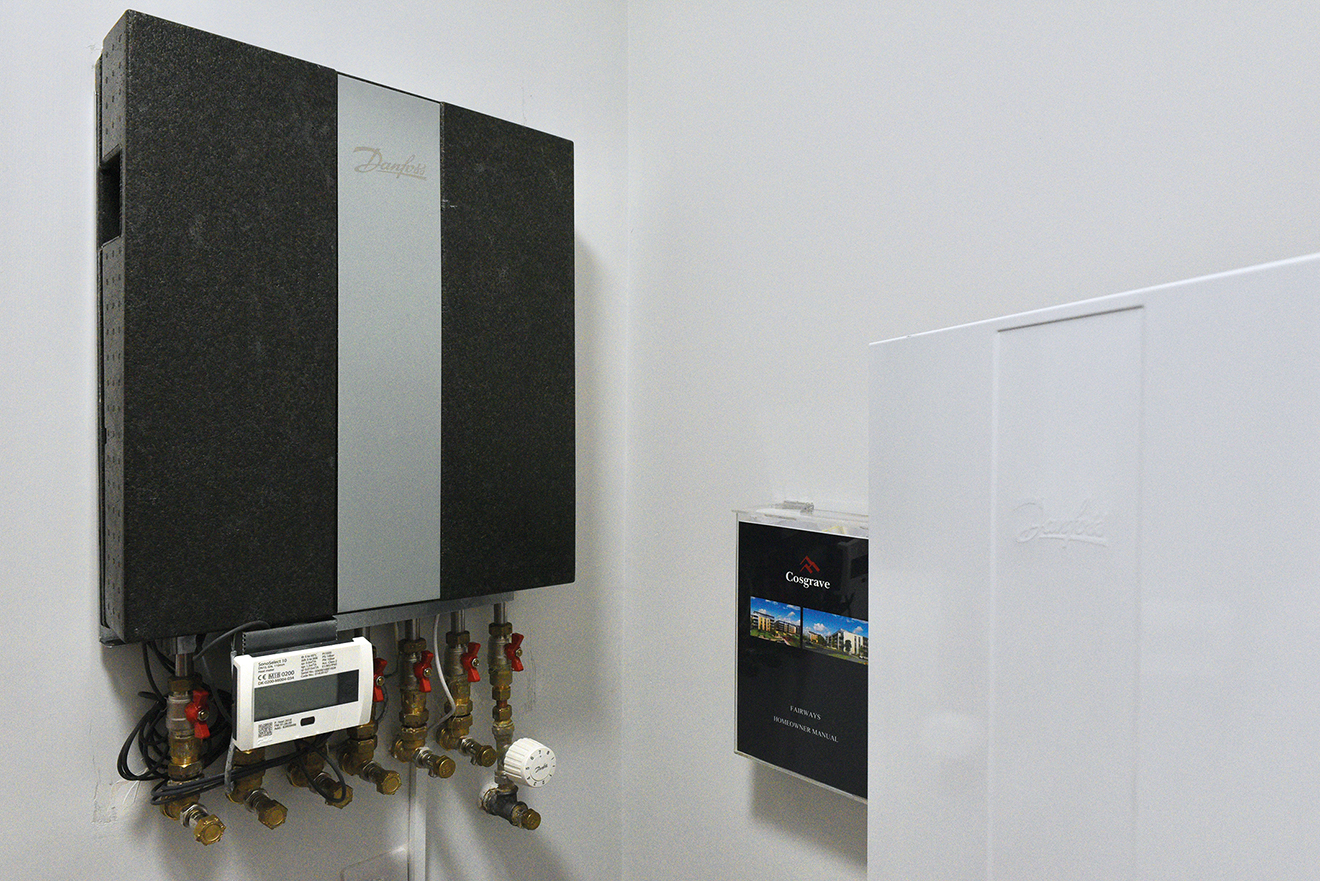 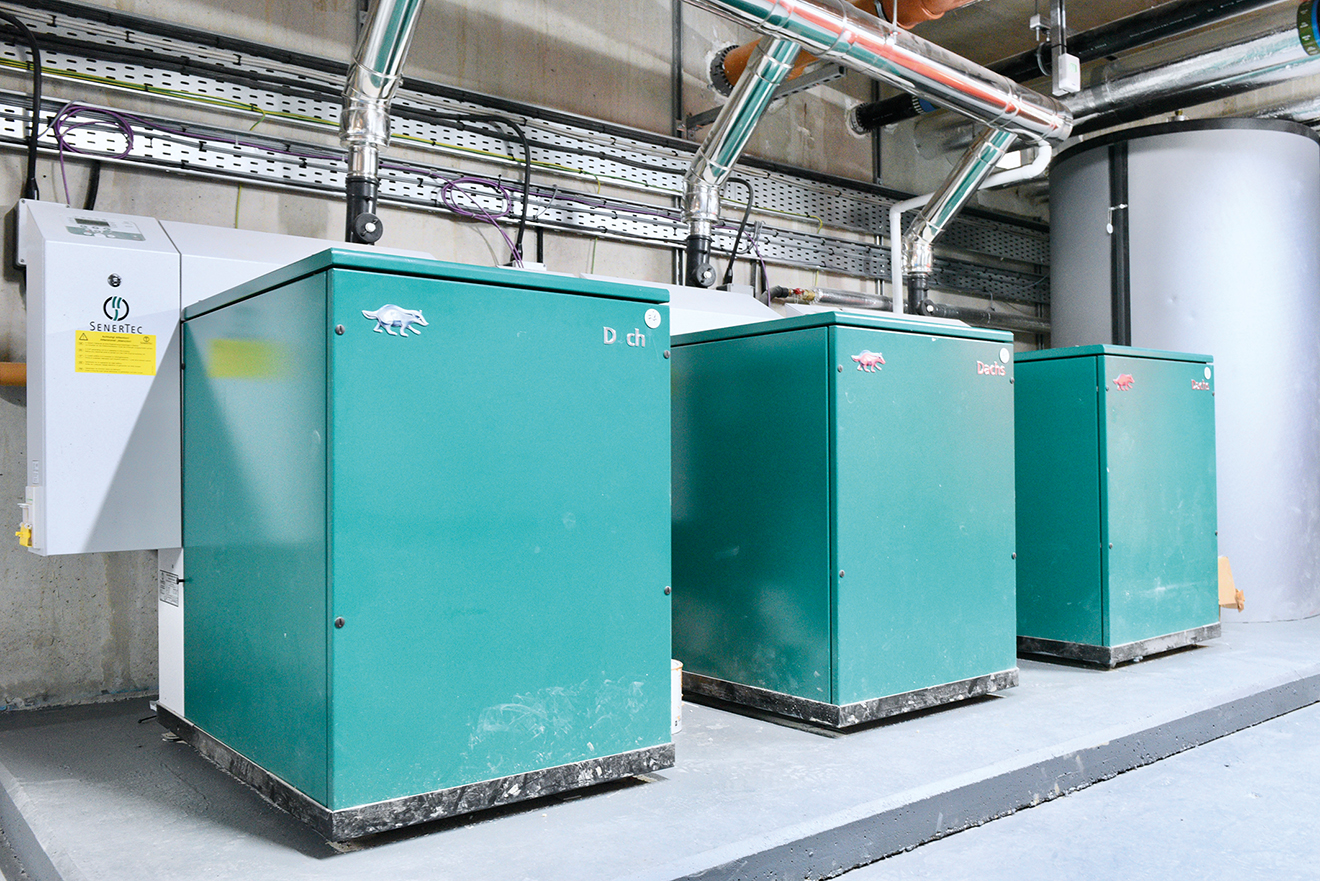 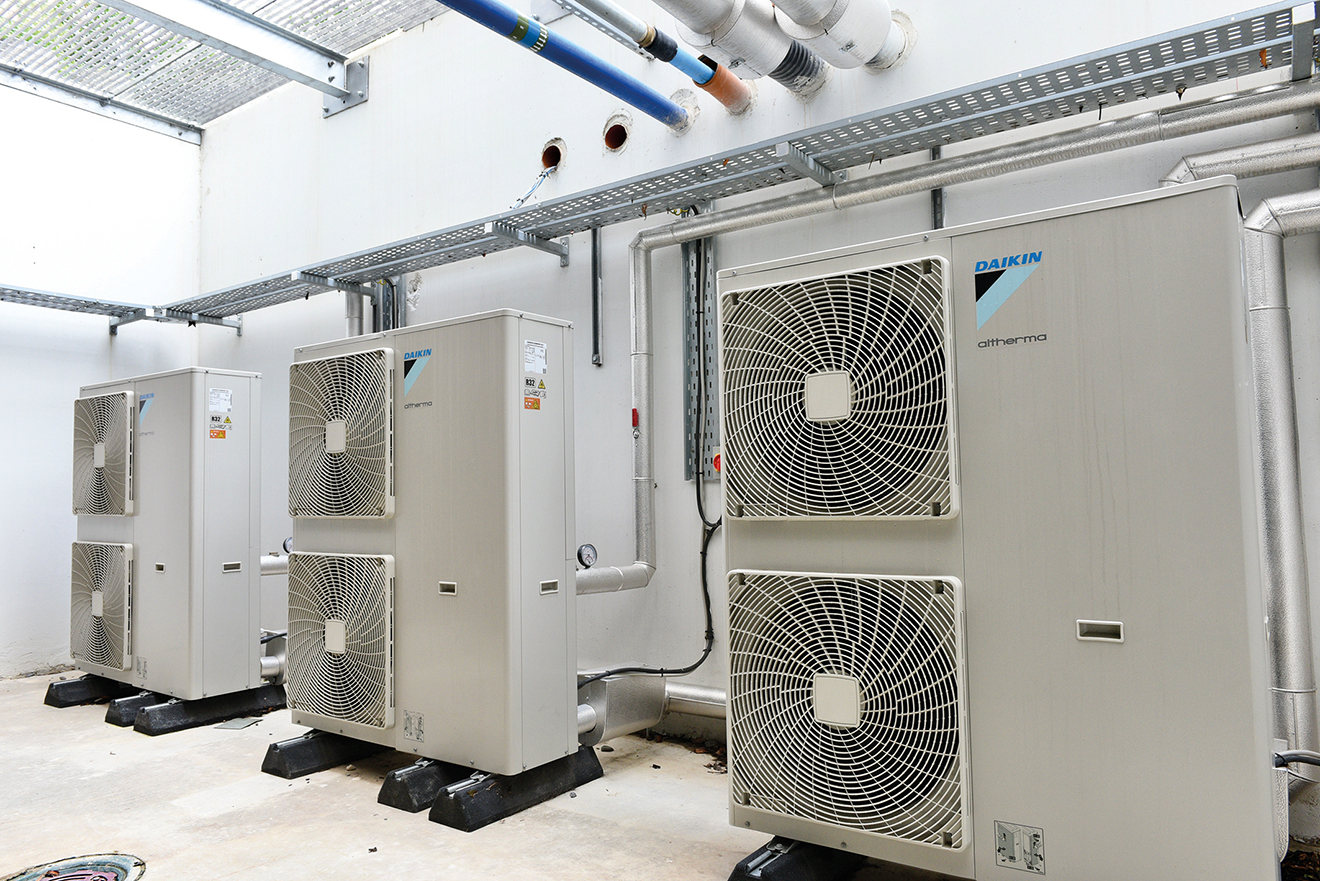 The 12-month timeframe was a challenge, admits Adam, but one they have ably risen to numerous times before. “Cosgrave Developments picked us for the job based on what they witnessed us achieve on a previous block, Eustace Court located within Cualanor development,” says Adam. “That was a full mechanical installation on 90-plus apartments within nine months. The client could see that from previous projects that, we can deliver the volume of apartments to their exacting dates.”

Kerrigan Mechanical ensured they met each deadline within the project by creating a detailed forecast map of manpower and programming schedule of works at the start of the Fairways project.

“The most efficient way to run the project was to have one crew of six to eight men working solely on the basement and primary pipework. Then two crews working on first fixing apartments and a further two crews coming up behind doing the second fix. Our site manager Owen Keating ran the day-to-day operation, ensuring that each team kept to their individual deadline each and every week.”

Located at the centre of the exclusive Cualanor development on the Upper Glenegeary Road in Dún Laoghaire, this high-profile NZEB block was one of the first of its kind in the area.

“This is a high-end project and like all Cosgrave Development jobs, only top quality products were specified. We used products that have been tried and tested by us, Consulting Engineer Richard McElligott and Cosgrave Developments: Buderus boiler, SenerTec Dachs CHP and Wilo pumps for example – all German quality-built systems.

“This was our fourth district heating project for Cosgraves and the first NZEB. It’s a great achievement and a real feather in the cap for Kerrigan Mechanical.

Based on their performance on delivering this block to Cosgrave Developments sub 12 months, Kerrigan Mechanical are delighted to have been awarded the next two blocks at Cualanor – Cheevers Court and Halliday House – with a combined total of 360 apartments.

“We’re delighted that our relationship with Cosgrave’s goes from strength-to-strength. Not only have we delivered a Nearly Zero Energy Building for them we have instilled confidence that we are a contractor that achieves dates while still achieving high standards and quality workmanship. We ensure there are no delays so the tenants can move in on time, as promised and as advertised.”

The company supplied and commissioned three SenerTec Dachs micro CHP (Combined Heat and Power) units to generate heat and electricity for the development. These are the largest selling CHP units in Europe and highest selling micro CHP units in Ireland. Developed and manufactured by German company, SenerTec GmbH, they are ideal for apartment blocks and other small commercial projects.

This means the entire installation is electrically self-reliant. The proven technology of the SenerTec Dachs CHP units is backed by the highest level of service delivered by Glenergy. The company has established itself as a leading and innovative provider of Part L and NZEB solutions to the Irish market. In addition to CHP, Glenergy has a range of heat pumps and hot water heat pumps to fit most commercial and residential applications. Glenergy’s aim is to provide the best energy solution for the company’s clients at the best price whilst also taking into account long-term sustainability and greater social obligations.

Danfoss manufactured and supplied Heat Interface Units (HIUs) for all the apartments in Fairway Hall and Fairway Court for Cosgrave Developments. Each HIU unit was designed and hand built by Danfoss in Denmark, a country world renowned for excellence in energy efficient products and services.

The apartments’ entire heating and domestic hot water requirements are catered for in the HIU with energy consumption monitored to allow each customer to pay for the heat they use in a fair and equitable way.

With a district heating system, as installed in Fairways, there is no need to install gas pipes to each apartment. This removes the risks of dangerous gas leaks and/or explosions. In addition, because there is no combustion taking place in the apartment there is no risk of associated carbon monoxide poisoning.

Hot water is heated only when it’s needed, and it heats instantly. Bill Carbery, Business Development Manager at Danfoss explains, “Whether you just want to wash your hands or run several showers simultaneously, Danfoss HIU’s keep pace with the requirements. Instant DHW means never running out of hot water and of course there is no storage cylinder meaning stored hot water never goes to waste and valuable storage space in the apartment is freed up.”

Danfoss also supplied TPOne programmable Room Thermostats to each apartment allowing easy control of the apartments heating schedule with user friendly over rides for when you come home early or stay up late. “All this comfortable living is provided at reduced running costs, both to the pocket, and the environment, says Bill. “Ongoing servicing costs are also reduced as there are no gas certifications required and any repairs can be quickly and easily effected.”

Beyond the apartments there are lots of unseen Danfoss control valves, energy meters and automatic isolation valves, all helping to create the conditions for maximum efficiency of the basement power plant. Danfoss has a long association with Cosgrave’s Cualanor development in Dún Laoghaire. Bill says, “We are honoured to be retained as the preferred HIU manufacturer for more than 10 years on this development of over 1,400 homes.”