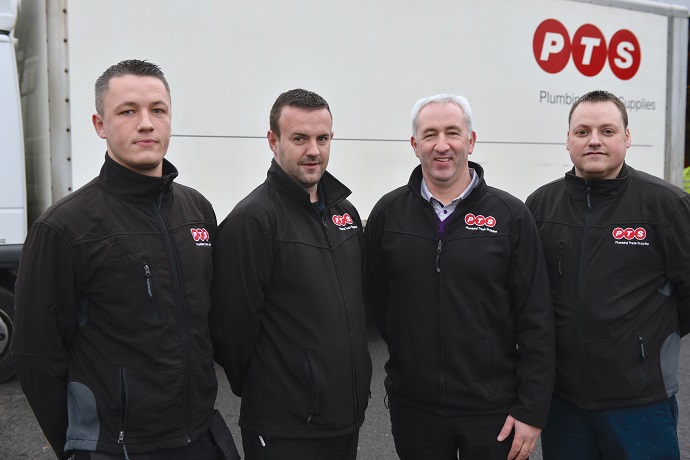 Following the retirement of the highly respected George Hillock, who had worked for PTS (and formerly Spendlove C. Jebb) for 46 years, Mark Cathcart has been appointed to the role of Branch Manager at the company’s Regional Distribution Centre (RDC) while Kieran Kearney is the company’s new Manager of Contracts Branch servicing Carillion.

“George actually hired me, so it means a great deal to take over from him,” explained Mark, who was appointed alongside new Assistant Branch Manager, Paul Graham.

The pair will oversee the busy Regional Distribution Centre which is the central stock hub for the seven PTS branches across Northern Ireland and the Republic of Ireland.

Mark has over 27 years’ experience in logistics, including 12 years with PTS – and he will need to call on this experience to ensure the smooth operation of the busy RDC.

“The RDC is a central stock hub for the PTS business in Ireland. Each of the seven branches draw their daily stock requirements from it, to ensure fast and efficient distribution of orders across Northern Ireland and the Republic of Ireland.

“It’s a major operation and critical to the smooth running of PTS, but we have strong systems in place and an experienced team.”

Paul Graham was recently appointed Assistant Manager of the RDC and he is another person who has been promoted from within the company.

“I have worked for PTS for over 10 years and during that time I have been involved in the Regional Distribution Centre, mainly looking after ‘Goods In’,” he said. “It is a

good company to work for and I’m enjoying the challenge of my new role.”

“In essence, I have been in a supervisory role for five years but this promotion gives me more responsibility,” explained Kieran, who has been with the company for 12 years. “This is a major contract and a complex operation, but we have a great team around us and a strong supply chain that allows us to forecast future requirements for the wide variety of work Carillion carries out.

“We have a superb working relationship with Carillion that allows them to deliver their work smoothly and without disruption.”

Making it a double promotion for the Cathcart family is Lee, whose father Mark is the new RDC Branch Manager.

“I actually started with PTS in the Regional Distribution Centre about nine years ago, so I’ve come full circle,” said Lee. “I was here for about a year-and-a-half before moving to the trade counter in Lisburn.

“It is good to be back in the RDC and to also gain a promotion. We have a good team here and it’s a role that I enjoy.”

Concluding, Barry Lowe, Area Sales Manager at PTS, commented, “We have a long history of promoting from within and maintaining continuity and that is again highlighted with the appointments of such experienced staff.

“Our focus is, at all times, on providing the highest level of service for our customers and we have no doubt that these appointments will further enhance this.”