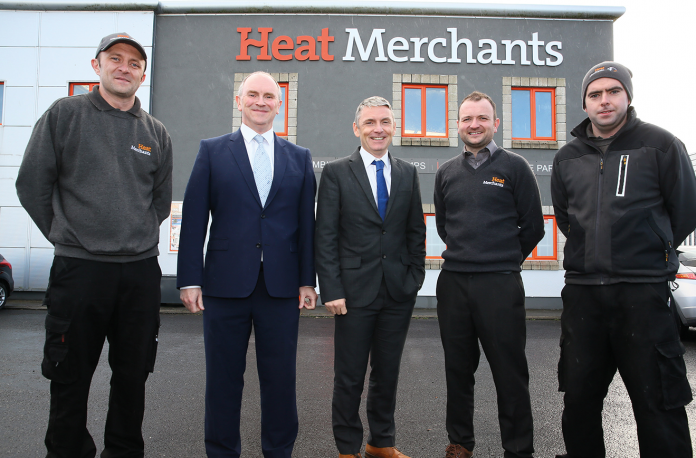 The Minister for Rural and Community Development, Michael Ring T.D. officially jointly opened the new branch of Heat Merchants in Castlebar, Co Mayo. The opening is part of a €4million investment programme by the Heat Merchants Group, which will see the opening of nine new Heat Merchants branches, and four additional Tubs & Tiles showrooms over the next three years.

The new Heat Merchants branch – located in a 4,400 sq. foot premises at the Castlebar Retail Park – will supply a comprehensive portfolio of heating, plumbing and renewable energy solutions for both domestic and commercial projects.

A range of technical services, including heating system design and specification, commissioning, ancillary certification, after-sale service and installer training, will also be available at the branch, which is managed by John Derrig.

Heat Merchants Group is an Irish- owned company trading as Heat Merchants and Tubs & Tiles. The group has 32 Heat Merchants branches and 12 Tubs & Tiles showrooms supported by a central warehouse and distribution hub based in Athlone. The Group’s business support services and technical design hub are based in offices in Athlone and Balbriggan, Co Dublin.

As part of its expansion plan announced earlier this year, Heat Merchants Group is also increasing its central distribution and business support centre in Athlone with the addition of an extra 20,000 square feet of warehousing which will extend its capacity to service its expanded branch network, including the new Castlebar branch.

Alan Hogan, Heat Merchants Group Managing Director, said the new Castlebar opening was another important milestone in the expansion of the Group and its commitment to supporting the economy of towns throughout the country.

“As the largest suppliers of heating, plumbing and home improvement materials to the professional and retail markets in Ireland, Heat Merchants Group is committed to providing innovative support services to customers and driving highest standards in heating, plumbing and renewable sectors. We look forward to providing that quality service from this new store in Castlebar.

“This opening is part of the Group’s exciting growth strategy that is focused on providing an excellent service to our customers in both construction and retail through branches that are situated in locations offering convenience and expert advice and service to our customers, and reducing their travel times to pick up vital products or spare parts wherever they are working.”