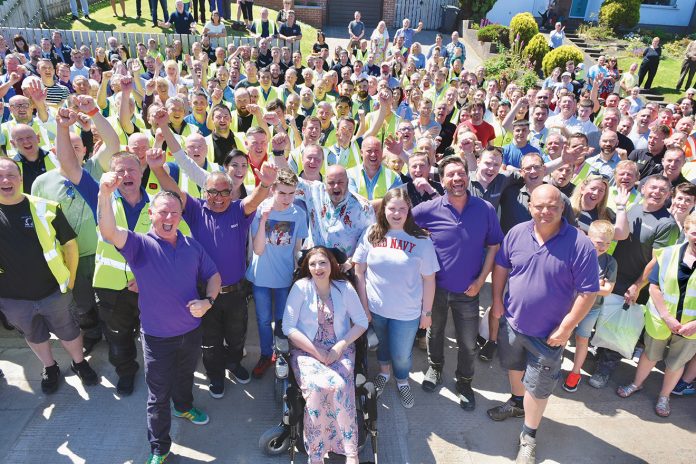 The overwhelming generosity of hundreds of tradespeople and suppliers from across Northern Ireland has changed the lives of a North Down family forever. For the first time in its 20-year history the BBC’s DIY SOS programme visited Northern Ireland in June to transform the home of the McCreight family from Bangor.

And the programme received one of its biggest ever responses to their calls for help as the DIY SOS team completely reconfigured the McCreight’s home. With mum Mandy spending around 80 percent of her time in her bedroom due to health complications, the family spent large amounts of time apart despite living in the same house.

An emotional Mandy thanked every one of the tradespeople and suppliers after presenter Nick Knowles revealed their new home to the McCreights on Thursday June 27. Build Manager on DIY SOS, Mark Millar, who lived in Bangor 35 years ago before moving to England, explained that the programme generally receives around 300 offers of help per programme. In Northern Ireland they received over 850 offers of help from local tradespeople and suppliers.

“I have been so proud to work with the tradespeople and suppliers here,” said Nick.

“The way the guys have gone about working has been amazing. For people to see this work for the family and for those who worked on the project – and I know many of them have got a lot out of it – it sends out a message all over the country that we are a group of islands full of good people who want to do good things.”

Plumbing & Heating Magazine spoke to a number of those who volunteered their time or materials for the DIY SOS Big Build. Colin Beggs from Sharpe Mechanical said the company was proud to have played its part.

“We supervised all of the plumbing and gas installation inside the house,” said Colin. “We wanted to be involved and to help in any way we could. We all have families and hope we are never in the position of the McCreight family. It was really great to be a part of this and it was amazing to see the way all the people on the job came together – we have made a lot of new friends and contacts.”

The youngest worker on the project was 16 year-old Shay Wilson who joined his dad, George from SMP Solutions.

“On day one we just got stuck in and helped tear the house apart then on day two we put the first fix gas pipework and gas boiler in. We then put the second fix radiators and waste disposal in the kitchen. It was four days’ work in total but it was a joy for Shay and myself to be involved – we were glad to be able to do anything we could do to help.”

Robert Best from Beggs And Partners said they supplied all heating systems inside the house including new boilers, radiators and pipework,” said Robert. “We were proud to be able to help this family at a time when they needed it most.”

Steven McMeekin from North Down Boilers said he found himself helping out wherever he could on the project. “We installed the gas heating system but before we got to that we helped the plumbers at the bathroom stage,” said Steven.

“Everyone wanted to do their bit and chip in with whatever they could do. There was a real sense of pride in the job from everyone who was working in the house, it was great to see everyone getting on so well especially when you think there were 100 trades people in the house at times.”