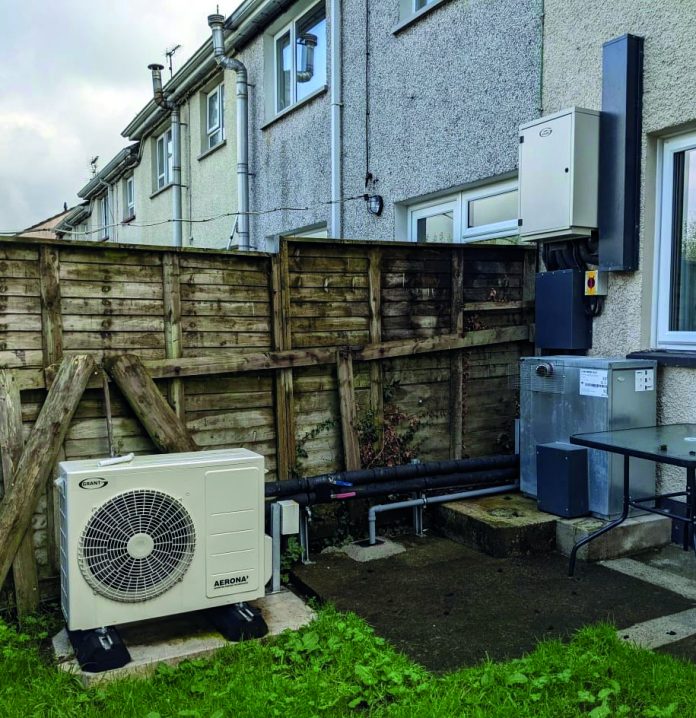 The RULET programme is jointly funded by Ulster University’s SPIRE 2 Project and NIHE and aims at reducing or eliminating the risk of low-income households being left behind in the transition to clean, smart, integrated energy systems.

As part of the programme, ten houses in Omagh, Co Tyrone were chosen for the pilot project and the aim was to improve the thermal envelope, with non-intrusive measures at a cost of less than £10,000.

These could include cavity wall Insulation, loft insulation, passive house fitted double glazed windows and non-intrusive air tightness measures. The existing houses had SAP Ranges of 51 (Band E) – 57 (Band D) and the aim was to improve this to a Band C.

On the heating side, three of the houses with an existing oil boiler had a 6kW air source heat pump installed and linked to the existing liquid fuel boiler as a hybrid system.

To further reduce carbon emissions, these boilers would run on hydrotreated vegetable oil (HVO), a renewable liquid fuel manufactured from waste that offers an immediate c.88% reduction in carbon emissions over kerosene. The others were fitted with a mix of air source heat pumps, electric battery, solar PV, and electric immersion hybrid.

The project has completed one year in operation and the results are currently being compiled and reviewed by the project management team.

However, Patrick Keatley from UUJ gave us an update pre-publication and explained, “During the trial we monitored the performance of both standalone heat pumps and hybrid systems which work alongside either gas or HVO-burning boilers.

“Most of the learning has been around cost-effectiveness for both the landlord and the tenant, as well as understanding how the tenants interact with unfamiliar technologies and tariffs. The idea has been to try to “fit the technology around the tenant,” rather than vice versa.

“Technically, in the right situation all the systems can perform well but in terms of CO2 emissions, HVO-fired boilers delivered the most rapid and significant reductions, while requiring the least behavioral change by the tenant, or retrofit by the landlord.

“While there are challenges around cost and supply at scale, it is clear that HVO could be an effective decarbonisation solution for some houses and some tenants. Government support for HVO as a low-carbon heating solution could make it a relatively straightforward and cost-effective option for decarbonizing ‘hard to treat’ homes.”

This statement is very encouraging and adds to the body of emerging evidence that HVO has a useful role to play in decarbonising off grid homes, building on the current 150 building demonstration trial underway in GB.

H&A Mechanical Services Draperstown completed the installation works and they are the first MCS registered company in Northern Ireland using OFTEC as their preferred certification body.

It is great to see HVO performing well as part of these independent trials and gives us confidence that our proposed move to low carbon biofuels is the correct methodology for decarbonizing off grid homes.

We have said it before and will say it again – a mix of solutions are required to decarbonize the housing stock in Ireland and we need to up the installation standard across the board as we move to renewable solutions, including biofuels.

We look forward to the detailed results from this trial which we will use as further evidence that Government should include biofuels as a viable option to replace kerosene in next year’s energy strategy.

In GB, MCS is the accepted standard for renewable installs and H&A are leading the way and are the first OFTEC/MCS accredited company in Northern Ireland.

We would be confident that any funding for renewable technology in NI will require MCS certification and we would encourage existing technicians to consider joining OFTEC’s MCS certification scheme to demonstrate to customers that they are competent installers which will provide them with confidence that the work carried out has been completed to a high standard.