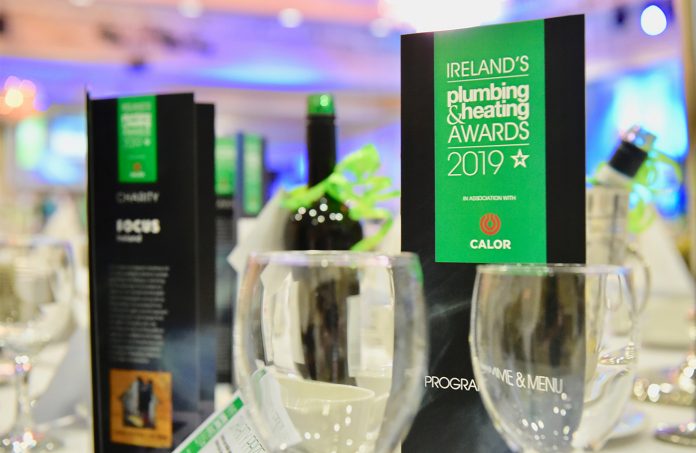 The awards paid tribute to those who are blazing a trail in the plumbing and heating industry right across Ireland – from those who are starting out as apprentices to individuals who are at the very top of their game and those who have given a lifetime’s service to the industry.

The judging team consisted of, Head Judge, Michael O’Brien who has 46 years’ experience in the industry and is the former purchasing director of The Heat Merchants Group. Joe Ward is another industry expert with great experience. Joe founded Ashwood Heating back in 1998. Sean McBride also brought great experience to the judging process having worked both at home and in England. He is now helping to raise standards across the industry with OFTEC Ireland.

Compere for the evening was actress and comedian, Deirdre O’Kane and the nominated charity was Focus Ireland, a charity which works across the country to combat the homelessness crisis which is currently gripping the nation.

One of the most poignant moments of the evening came when former Hevac boss, John English was recognised for his great contribution to the industry with a posthumous Overall Achievement award. Mr English’s widow, Martha received the award on her late husband’s behalf as those gathered gave a standing ovation for a man who was universally liked and respected throughout the industry.

Ireland’s Plumbing & Heating Magazine, Publication Manager, Jacqui Fairley thanked everyone for their support of the awards.

“We are very proud to host Ireland’s Plumbing & Heating Awards,” said Jacqui. “It was very encouraging to see such strong competition in the Apprentice of the Year category – this is a real indication that the industry will be in safe hands in the future.

“Indeed there was fantastic competition across the 15 categories which shows that this industry is operating at a very high level right across the country, from small businesses right through to major employers. It was also very fitting to be able to recognise John English with the Overall Achievement award and we were very proud to invite Martha English to the stage to receive the award on her late husband’s behalf.”