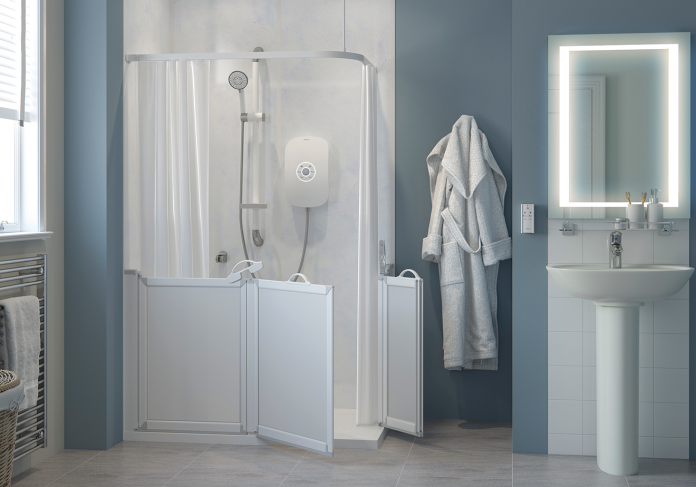 When it comes to bathroom design and installation, visual aesthetics ateusually the first thing the customer is focused on.

However, when it comes to designing for the visually impaired, a whole different set of design criteria comes into play. However, there are lots of ways to create a bathroom that works for everyone, starting by minimising the obstacles –

With the introduction of AKW’s iCare, the world’s first wireless and Bluetooth smart electric shower that can be controlled remotely, there has been a giant leap forwards in smart shower design innovation. iCare was developed in conjunction with Occupational Therapists and the Royal National Institute of the Blind (RNIB).

The iCare shower gives the ability to tailor the temperature and ow via tactile buttons on the shower unit, or by using iCare’s wireless remote control or smartphone app. Settings can then be personalised and saved and alarms programmed to turn the shower on at specific times.

Audible temperature and ow control indicators have been included for the visually impaired, and data can be streamed to the smartphone app, monitoring ow rate, water usage and temperature. A delayed mode has also been incorporated to enable carers to transfer special needs users out of the shower before it can be reactivated.

It is possible to design bathrooms that look good, but that also work for the visually impaired. By thinking about lighting, clutter, contrast and accessibility, it is possible to create an inclusive bathroom that suits the whole family.

For more information on designing bathrooms for those with visual impairment, dementia or for those who have had strokes, why not read one of AKW’s expert guides at www.akw-ltd.co.uk/akw-guides/