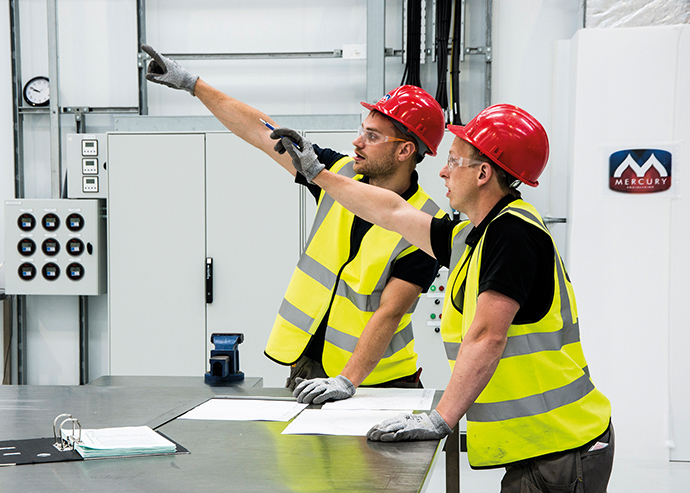 It seems that the training issue within the construction sector is finally being tackled. The CIF is being proactive by engaging with Solas on several innovative approaches to upskill people and get them on sites as quickly and safely as possible. The “Shared Apprenticeship Scheme” which has been rolled out in Wexford lets apprentices work with a number of companies whilst developing essential skills. A new website – www.apprentices.ie – that aims to match employers and job seekers to suitable apprenticeships across the country has also been launched. Solas is aiming to replicate the success of the apprenticeship model in Switzerland, where 70% of all 15-19-year-olds participate in an apprenticeship.

Whether Solas is entirely successful or not with its plan to replicate the Swiss apprentice model, construction firms at home are forging ahead with their own schemes to ensure they have enough apprentices to carry out work. Mercury Engineering runs a number of schemes and scholarships that are intended to develop careers within the firm and create the foremen and project managers of the future that will continue to drive the company and ensure it remains at the top of its game.

One such scheme is a recognition award system says Joanne Cluxton, Human Resources Manager at Mercury Engineering, a programme that’s been running for the past five years. At the end of each year, a nomination form made up of seven categories is sent out to all foremen who have the opportunity to nominate an apprentice of their choice. Categories include overall electrical apprentice, overall mechanical apprentice, safety quality performance, productivity, most improved apprentice, newcomer in the past year who’s made the greatest impact and finally, apprentice who fully endorses Mercury’s values.

Nomination forms will be assessed by a committee in head office and winners will be chosen once exam results from Solas and other criteria such as attitude and attendance are taken into consideration. “We hold an awards ceremony every December where winners are presented with a certificate by CEO Eoin Vaughan along with a One4all voucher. It’s a really worthwhile scheme and we’ve found that our apprentices really engage with it.”

Currently in his third year of an electrical apprentice at Mercury, Sean O’Sullivan applied for the scholarship scheme in the planning category. “My application was successful so I’ll be starting in September. I’m really delighted, it’s such a good opportunity. I’ve always been interested in the business aspect of things so I chose the planning category as it involved scheduling and budgeting etc. I’ll be starting a higher certificate in building services in DIT in September on a part-time basis.” Mercury will pay for all of Sean’s college fees and will also offer him a full-time salaried position in his chosen category, once he passes all his exams. “Mercury is going to invest money, time and training in me. The company doesn’t want to invest this money and have me walk off when I have my degree so it makes sense to offer me a role once I’m fully qualified.”

Throughout his apprenticeship so far, Sean has had the chance to work on a range of projects across several sectors. He started off on Intel in Kildare and he’s currently working on the new incinerator in Ringsend. “I’ve never been on temporary lay-off, Mercury has seen me through my whole apprenticeship with solid work. I’ve never had any reason to worry.”

Mercury has just started to recruit electrical apprentices for the first time in two years. “We don’t take on too many when we know we won’t have the work for them. We take enough apprentices so that we can keep them in employment on an ongoing basis,” says Joanne. Other initiatives at Mercury include a workshop training scheme for apprentices, currently in planning. This will involve upskilling apprentices who aren’t on a scholarship and ensuring they’re rotated across several different sites and sectors.

Mercury’s two-year graduate programme has been running since 2009. This year, the firm is looking to take on 25 third level graduates. “Selected graduates are given a group project to work on which is chosen by senior management within Mercury. At the end of six months, they present their project to senior management over three days. Six months later they come back for another block of training which is all put together through Engineers Ireland.”

“Bringing apprentices through for four years and then finishing with them isn’t the goal at Mercury. We want them to finish their apprenticeship with us and bring them into other roles within the business, whether that’s in an engineering capacity or in a trade capacity. We want to ensure they’re the best in the business and that we retain them after their apprenticeship. In time they’ll become our foremen or project managers and continue to progress within the company.”