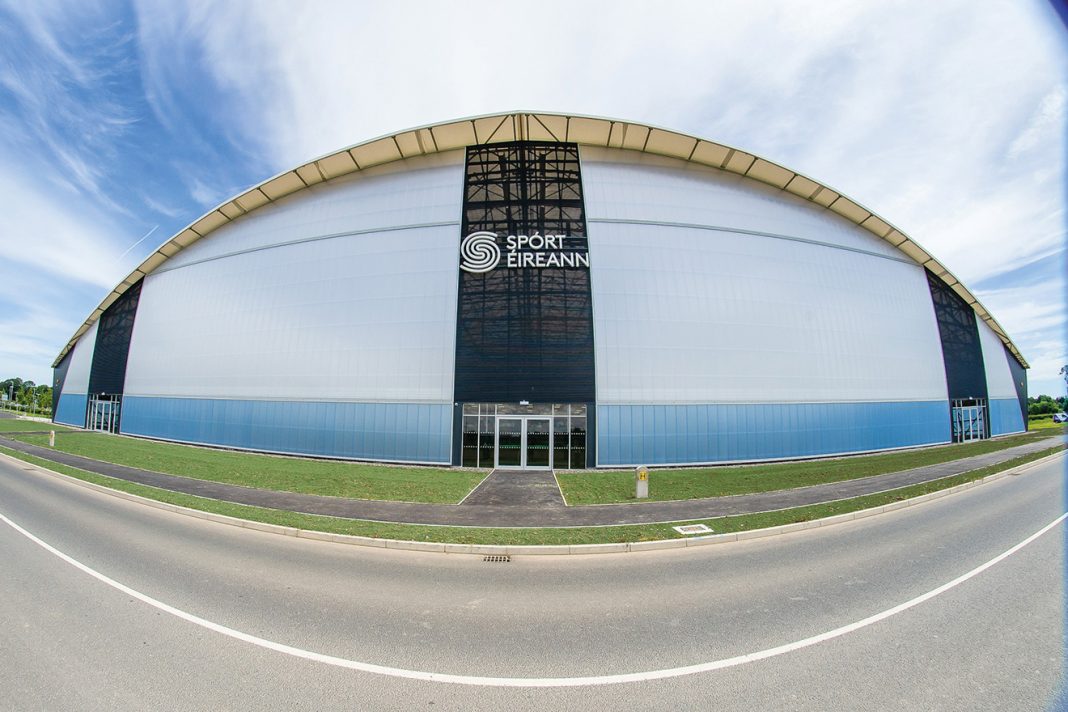 Earlier this year, Riverside Mechanical completed the second phase of the National Indoor Arena in Dublin, a much-lauded project for the company and a very worthy addition to its already impressive portfolio. Phase 1, which was completed in 2017, earned Riverside Mechanical several awards thanks to the high standard of finish achieved by the company. Built as part of Project Ireland 2040, the new world-class training facilities at the National Indoor Arena were opened by An Taoiseach Leo Varadkar in June 2019 and will be used by a host of international, club and county teams. This project provides permanent indoor facilities for Gaelic games, soccer and rugby and has, since its opening, given Irish sport a serious boost.

The second phase of the project consists of a full-size indoor synthetic soccer pitch, built to GAA standards, along with changing rooms, office space and storage. An indoor synthetic rugby pitch, built to IRFU standards has also been delivered by Riverside, again with changing rooms, storage and office space. The state-of-the-art synthetic turf system installed on the pitches have been constructed on a firm 60mm dual-fibre surface, with long synthetic grass featuring a high-density 14mm shockpad. This provides players with a better grip and a smoother playing surface. This covered facility will allow teams to train all year round, regardless of weather conditions, in a consistent world class environment. Ireland’s two leading field sports have access to extensive indoor and outdoor facilities along with the support of the Sport Ireland Institute. The bespoke gym has been specially designed to cater for the unique needs of Ireland’s rugby and soccer players and provides the very latest equipment and technology. Dressing rooms for all teams have been built to the same high standards as the Aviva Stadium’s matchday facilities. An Elite Fitness Conditioning Centre complete with Hydrotherapy pool was also part of the Phase 2 remit, along with player analysis rooms, player catering facilities and rehabilitation rooms. Riverside’s works consisted of the key component of design and build of the mechanical and electrical services. 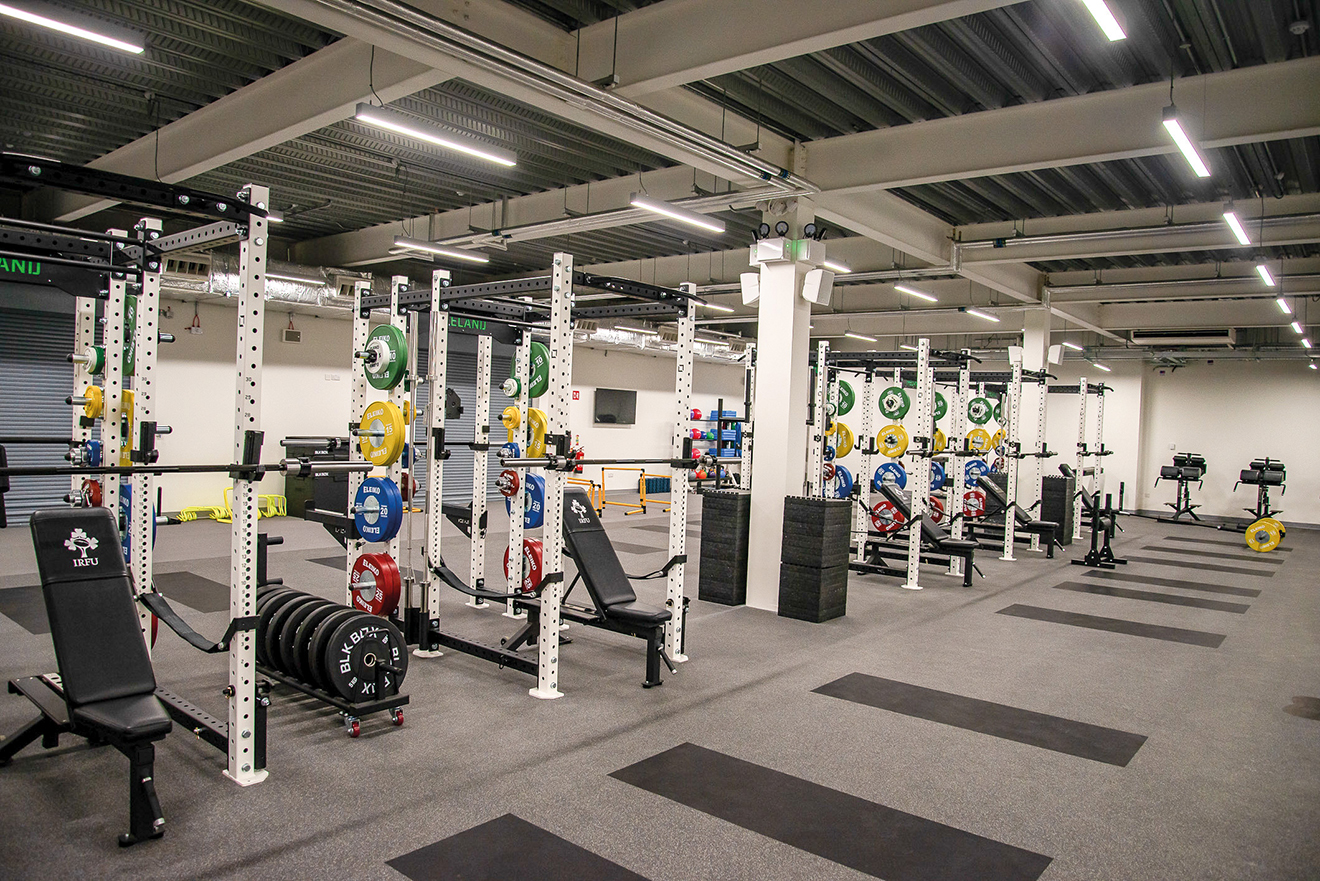 The NIA is served by a Gas Fired Central Boiler Room, known as the Energy Centre, situated on the second Floor of the NITC Building. The Centre also includes the incoming mains water and gas services which feed the main water tank and boosters pumps, as well as four gas boilers. From the water tanks and gas boilers, water and heating distribution pipework runs throughout both phases of the development to feed localised plantrooms which in turn feed their respective standalone areas such as the NITC, NIATC, NGTC and Phase 2 IRFU and FAI zoned areas. Each zoned area includes its own heating headers to serve the heating, radiators, underfloor heating, FCUs, air curtains, calorifiers, AHUs, etc and an individual water tank with booster pumps to feed the local sanitaryware, kitchens, showers, etc. All plant rooms and mechanical services are controlled via the BMS system to allow for time and temperature monitoring for environmental efficiencies. Commenting on the project, Tony Ptohopoulos, Managing Director at Riverside Mechanical, said, “This project for Riverside Mechanical personally brought me to Ireland with my family. I am very proud to say I was involved from concept to completion on this prestigious flagship development which is a clear success for Riverside and for the future of sport in Ireland. We would also like to thank the main contractor on this project, Buckingham Group Contracting Ltd. We would look forward to working with them again in the future.”

With the completion of Phase 2 of the National Indoor Arena, Riverside Mechanical has created an iconic structure for the current and next generation of sports to thrive and inspire.

The project is a worthy addition to the company’s diverse, award-winning portfolio.

In operation since 1979, Manutec are experienced in meeting the control system requirements of leading organisations in multiple industries, now including the National Indoor Arena Project.

Having previously completed highly successful controls projects on the National Sport Campus, Manutec were approached by Riverside Mechanical to outfit their sophisticated Building Management System (BMS) on the challenging, Design-Build National Indoor Arena Project, knowing that the latest, most appropriate control solution would be delivered.

A central requirement of this particular BMS was ease of use by multiple sports disciplines from several locations. This controls solution utilised the latest in open protocol BMS, communicating with third party plant via Modbus and BACnet as well as direct digital control. The latest technologies, including pressure independent control valves (PICV’s), metering and intelligent pumps were all utilised to reduce carbon foot-print, whilst still maintaining optimum comfort levels. Readiness to trim time schedules and enhance reports proved to further reduce energy usage.

Manutec measures and analyses the heating, ventilation and energy usage, continuous monitoring and reporting ensures that all their targets are met.