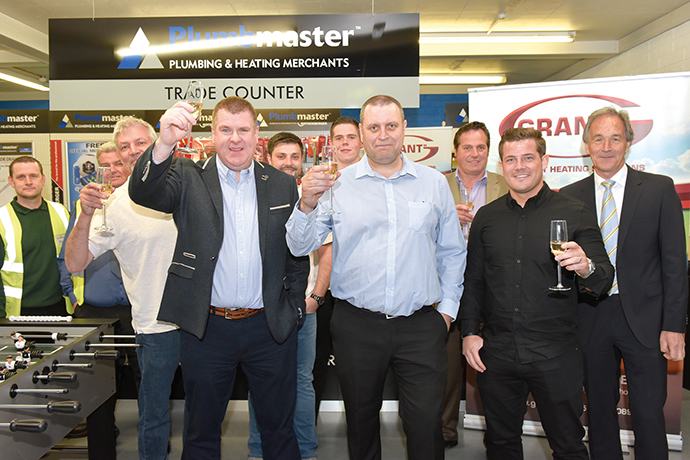 The complete rebranding of every Haldane Fisher plumbing and heating department will be completed by the end of July. The physical changes in each branch have included new vans, signage and uniforms but this is being backed by a new fleet of Plumbmaster vans. In addition, a new 40ft curtain sider lorry and a new website are set to be unveiled later this summer.

Eamonn McCarthy, Associate Director of Plumbing & Heating at Plumbmaster, said, “We are delighted that the launch of Plumbmaster has brought such a positive response, both from our suppliers and, just as importantly, our customers.

One of the benefits of Plumbmaster is that account holders can now enjoy favourable trading terms on the entire Haldane Fisher product range, including timber, building materials, hand tools, power tools, doors, floors and much more.

“An old adage of Haldane Fisher was ‘One call covers all’ and that has never been more relevant than now,” added Eamonn. “Being able to benefit from the Haldane Fisher product range on improved terms is a real bonus while the addition of our seventh Plumbmaster van and the new curtain-sider to our fleet will all help to further enhance our service.”

He continued, “As each branch has been completed we have hosted an official launch event and these promotions will continue as we move forward. We are adding to our product range all the time and the launch of Plumbmaster has also re-energised our staff, who have really got behind the whole process.

“We recently took part in a factory visit with Worcester Bosch and our training on new products has continued with manufacturers. All this will add to the considerable expertise and experience our staff already have and, in turn, benefit our customers.”

The company has also been supporting the local community, with Plumb Master sponsoring a team of 16 local runners who took part in the Virgin London Marathon, the Newry City Runners and St Mary’s Newtownabbey Under 8 football team.

Plumbmaster has also teamed up with Rothenberger for a Euro 2016 promotion that has included table football in each branch alongside a sweepstake. This promotion will see a donation made to the Energy for Children charity alongside the donation of the football tables.