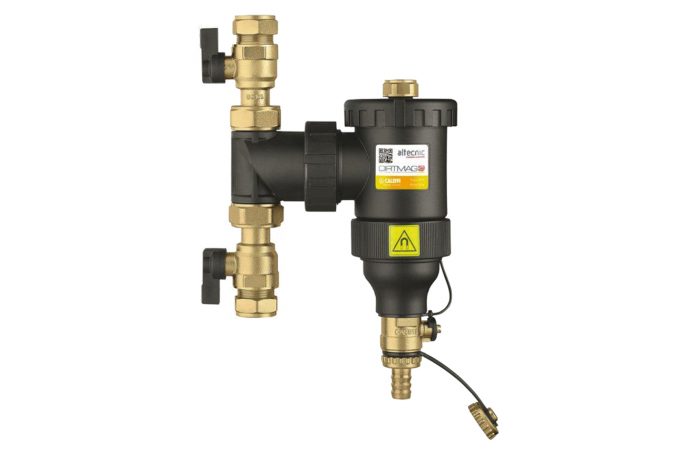 Modern heating systems, regardless of size, are becoming more and more dependent upon clean, suitable water quality. Materials used in the construction of expensive components such as boilers, fan coils, heat pumps and cylinders mean that having a clean, filtered or flushed supply is paramount to maintain the efficiency of the system. Research from the Energy and Utilities Alliance suggests that 80% of all central heating system issues are related directly or indirectly to sludge/debris in the system, so it makes sense to not only clean the heating system thoroughly but to also take preventative action so that it does not happen again in the future.

While many domestic and commercial heating systems will have some sort of dirt and air removal, the technology has moved on considerably in the last few years, so it’s important to ensure that all systems are reaping the benefits. This can be addressed by taking a whole system approach to preventative maintenance whilst conducting the annual servicing and safety check of the boiler.

RESULTS
Air and dirt are serious issues in a heating system and need to be removed. Air will cause noise in the pipes, low flow rates or even total circulation blocks, and inefficient heat transfer to the environment resulting in cold customers and greater heating costs. It can also cause corrosion of the system that results in weakening and even the breaking of components such as pipes, radiators or boiler heat exchangers.

To reduce air in a system you can fit valves that automatically vent air as it accumulates in a riser and, of course, standard and automatic air vents can be fitted to radiators. The advantage of having automatic valves is that the air build-up is managed on an ongoing basis rather than at its annual inspection or, worse, when it breaks down. The new Altecnic DISCALSLIM® is designed for continuous venting of air, down to the level of micro-bubbles (gradual and continuous degassing) and may be installed on either a vertical or horizontal pipe.

For debris removal, older systems may well have filters or strainers fitted, which will remove larger particles. There are two issues with this. The first is that smaller particles will not get trapped such as fine sand, rust and magnetite. Second, the strainer will cause a loss in water pressure in the system, which is only made worse as it gets clogged up. Whilst strainers need to be regularly removed and cleaned if they are not going to affect the efficiency of the heating system, modern dirt separators exploit gravity to remove even very small particles down to 5μm by reducing the speed of the water passing through it, which also means that it minimises any loss in operating pressure.

Some, such as Altecnic’s Dirtmag IQTM filter range, have triple dirt and air separation features. This includes an air vent for air separation, an internal polymer element for particle separation and hydraulic performances, and also features a magnetic dirt separator. A special ring, with two housings for holding the magnets, is located on the outside of the device body, helping to maintain a low pressure loss.

Ferromagnetic particles are retained in the collection chamber and prevented from returning to circulation. A drain cock with a hose connection allows for the simple removal of impurities. Full bore isolation valves also allow for ease of servicing whilst the filter is in situ. They are also available as part of compliance packs which include either a 22mm or 28mm filter, cleaner and inhibitor chemicals, a WRAS- approved filling loop and WRAS-approved electrolytic scale reducer. There are many older commercial heating systems out there where air and dirt build-up is an ongoing problem and even worse, they don’t have the latest technology to manage it.

The Altecnic 5466 Series DIRTMAG® dirt separator, available in sizes DN50 – DN150, utilises the combined action of several physics principles to solve this problem. The internal element consists of a set of radial reticular surfaces. The impurities in the water, on striking these surfaces, get separated, dropping into the bottom of the body where they are collected. In addition, the large internal volume of DIRTMAG® slows down the flow speed of the medium thus helping, by gravity, to separate the particles it contains. The collected impurities are discharged, even with the system running, by opening the drain cock. The dirt separator is designed in such a way that the direction in which the medium is flowing inside makes no difference.

Preventative heating system maintenance helps keep them efficient, so it is worth explaining to your customers how they may benefit from modern air and dirt removal systems.