Up to now, Ireland has never had its own Code of Practice for heating and plumbing in domestic dwellings. In other European countries, organisations take the existing European Standards (EN) and draft their own specific Codes of Practice.

The S.R. 50 series of Standard Recommendations, newly published by NSAI (Ireland’s National Standards Body) have been drafted as Codes of Practice for all those involved in the heating and plumbing industry. They are one-stop-shop documents that bring together the requirements of various relevant standards, building regulations and best practice.

Fergal Finn, the NSAI Standards Officer helped compile the new Codes of Practice for S.R 50-1: ‘Water-based heating systems in dwellings’ and S.R. 50-3: ‘Hot and cold water supply for dwellings and their curtilages. He explains, “The existing European Standards cover a region that extends from the south of Portugal to the north of Norway. But one size does not fit all. For example, Ireland and the UK are the only member states that use an unvented water storage tank, so a separate clause had to be written in just for us.

“There are also significant water infrastructure differences between the UK and Ireland which impact on how plumbing and heating systems work. In the UK, water pressure is guaranteed, in Ireland it is not. That’s why in Ireland instantaneous water heaters or combi boilers should not be installed. Pressurised systems in Ireland are fed by the cold-water storage tank in the attic; in the UK it’s fed directly from the mains.

“Traditionally, Irish plumbers, designers and architects study British handbooks for guidance – such as those published by Corgi or CIBSE – but they don’t include those Ireland-specific quirks.”

The Codes of Practice were arrived at following years of debate by committee members made up of time-served plumbers, engineers, representatives from government, academia and consumer bodies. Their main aim was to help and encourage designers and plumbers to ensure that central heating and water supply systems are not only designed and installed correctly and safely, but are also energy efficient and meet manufacturers’ criteria.

Fairness bench
While the S.R. 50 Standards Recommendations were written primarily for plumbers, they can be used in many ways. The Standards set a baseline for heating and water supply systems in domestic dwellings. Heating and plumbing contractors can use the Standards to support the inclusion of equipment and components in their pricing and demonstrate compliance of their work to clients as well as using it as a Code of Practice.

Fergal believes the Standards set a “fairness bench.” “If a plumber is costing a job fairly he can use the Standards to back that up. He can explain to the client that he has chosen to use certified pipework that is guaranteed to last a lifetime and is a lot less likely to burst than uncertified pipework. So he can stand by his pricing because he has carried out demonstrable quality work.”

Although the Code of Practice is a voluntary process, county councils, government agencies and other public bodies can choose to cite the reference to Standards into a tender contract and that becomes the legal bind.

Architects and Building Designers can also use the Standards as a Code of Practice in their work and as a specification to which installation works can be carried out to by subcontractors.

Bad habits
The S.R. 50 Standards Recommendations include guidance and simplified methods that could replace bad habits. For example, a heating contractor might normally replace a boiler with a like-for-like model of the same power, say 18kW. “Boilers installed in Ireland are traditionally oversized, which leads to the boiler operating at a lesser efficiency than what it was designed to do,” said Fergal.

“Best practice is to look at the structure and any retrofit measures that may have been done and recalculate the boiler sizing. This can lead to a smaller boiler giving the same thermal comfort but with reduced running costs and less environmental impact. There are several phone apps and websites available that enable quick, easy and accurate boiler sizing.”

So what does success look like for the NSAI’s S.R 50 Standard?
Fergal commented, “Just as the use of I.S. 813 by gas installers and I.S. 10101 by electrical contractors is widespread in Ireland, success would be that heating and plumbing designers and installers would use the S.R. 50 standards in the same way, improving the quality, efficiency and safety of installations nationwide.” 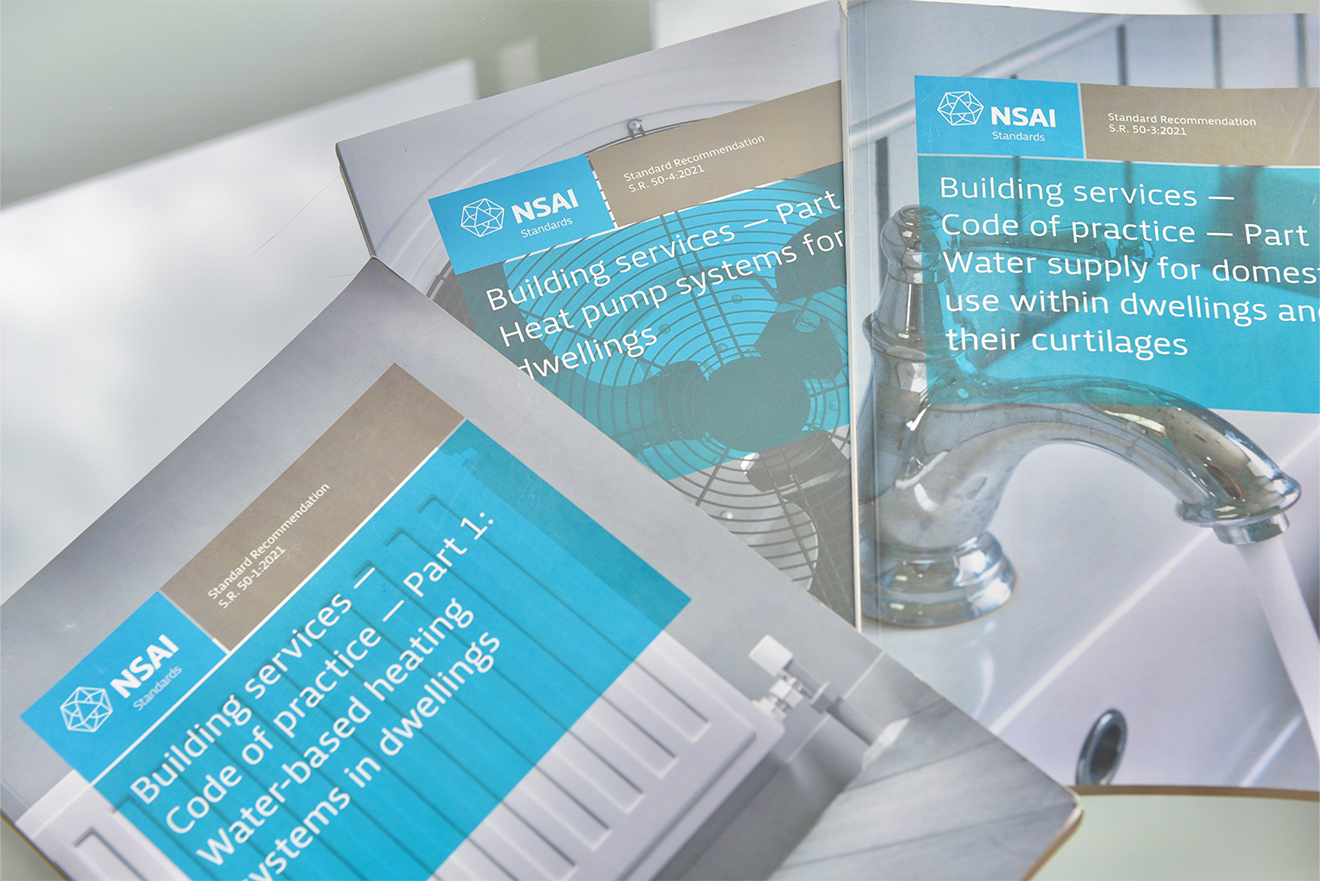 Codes of Practice are long overdue

The publication of the S.R. 50 Standards is terrific news for our industry and a long time overdue.

Previously, we had no structured guidance for anything to do with plumbing and heating or mechanical in the Republic of Ireland, simply rough guidelines. The new Codes of Practice will provide a lot more armour and backup for qualified technicians. They now have a reference to work from as to how to attack and understand the principles of a simple installation.

It has been written in a very user-friendly way. I was one of 10 members on the S.R. 50 committee, which included representatives from all levels of the industry. Fellow member, Ritchie Burke from HAPAI and I myself came up on the tools, so we understand the language of the trade. The manuals reflect that; they’re an easy read, factual, and the information is easy to find.

I had major input into the section about how to remove and decommission back boilers on page 100 of part 1. There are many instances of carbon monoxide poisoning happening in Ireland caused by improper decommissioning of back boilers. Now, there’s a strong reference to correct decommissioning in the Code of Practice, which is a terrific guideline. It works well for guys who are doing work with the Local Authorities, government bodies and grant awarding agencies, because they can make reference to this to the home-owner.

I’m very proud and humbled to have been a part of the process of writing the S.R. 50 Standards. It was fantastic to listen to what the other members had to say; they brought so much information and experience to the table. We all wanted to work together to improve the industry for future trades by providing a framework of accessible information for them to refer to in order to do a better job.