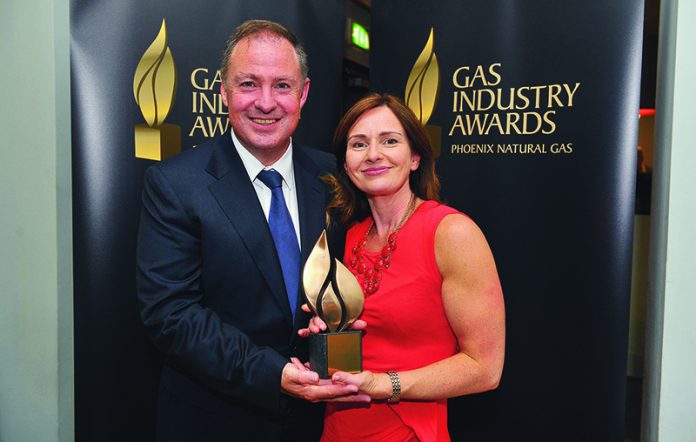 The event, which is hosted by Phoenix Natural Gas, recognises and rewards individuals and companies who are judged to have made a significant contribution to the growth of the natural gas industry locally.
Karen McAvoy Publishing – which is the company behind Plumbing & Heating Magazine – was recognised for the company’s continued commitment to all sectors of the industry.

The company first became associated with the natural gas industry in the late 1990s with the magazine ‘Energy’ and since them has introduced a number of support initiatives that have facilitated enhanced communication amongst the wider plumbing and heating industry, including trade shows, industry award events and the flagship bi-monthly magazine – Plumbing & Heating Magazine.
Wilsons Fireplaces is a family-run business that has continued to invest significantly in the opportunities that exist in the natural gas appliance market. Based in Ballymena since 1990, the business has recently opened two new showrooms in East Belfast and Lisburn. The company has invested in knowledgeable, experienced staff in its showrooms and is currently extending their range of live gas appliances in the Belfast showroom.
The final award was presented to Jim Watton Plumbing & Heating, which has been involved in the natural gas industry since its introduction to Northern Ireland in the late 1990s.

Since then the company has continued to grow in reputation, providing high levels of customer service to its loyal customer base in North Down and East Belfast. Jim Watton P&H’s support of Phoenix Natural Gas initiatives, its commitment to high quality workmanship and standing amongst industry peers has led to the company being recognised as a leading installation company in the domestic sector.

The new award recipients, along with previous winners, attended the awards event in May at James Street South restaurant in Belfast.

Alastair Pollock, Business Development Director at Phoenix Natural Gas, said, “This prestigious awards ceremony distinguishes so many individuals and companies within Northern Ireland’s local gas industry who have made a significant contribution through innovation. Their support and dedication has been outstanding and the three winning companies now join a first-class group of previous award winners.”

Training online is the way forward

Broadlands switches on to Natural Gas