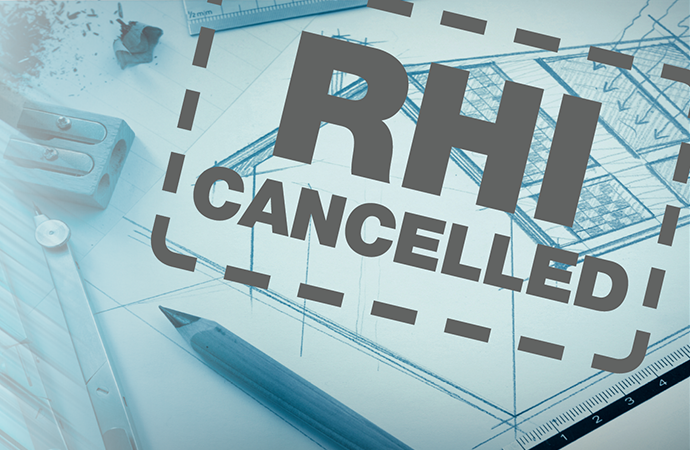 With increasing uncertainty over the long-term future of the industry, many businesses have already said they will, at the very least, have to cut jobs or in some circumstances close completely.

The only sliver of silver lining is that the sector may be able to use the positive engagement created by the shock decision to ‘plan ahead’ and ‘box clever’ to make the most of the limited opportunities available. But that will be difficult, given the lack of any clear strategic plan by the Government.

Lisburn-based manufacturer, Warmflow Engineering, said that, despite the setback, the company remained committed to the renewables sector.

Richard Thompson, Technical Sales Representative, said, “Over the past number of years Warmflow has invested heavily in developing class-leading biomass boilers and ground-source heat pumps in anticipation of providing the market with a new generation of locally manufactured products.

“During the short time that the domestic RHI was active, Warmflow products received strong support from the renewables sector, with gaining momentum. The announcement of the suspension to the RHI has been hugely disappointing to Warmflow and its customers.

“Despite this setback we will continue to support home-owners and installers who still wish to purchase our class-leading renewables products with or without the Government grant support.”

Ryan Turkington, Managing Director of the Cookstown-based engineering company, Turco, said that renewables work made up 20% of his business but we would now have to focus on fossil fuels again.

“We employ 35 people and we’ll probably have to lose seven or eight staff,” he said. “We’re a small business and that is very tough. We have cancelled jobs because customers won’t go ahead without the incentive. We’ve been making oil boilers for 30 years, so once again we’ll find ourselves flying the flag for fossil fuels. The RHI scheme encouraged the renewables sector and now it’s gone.”

Peter Lonton, Business Development Manager at Waringstown installation company, Green Energy Technology, said it had to turn away about £1.5million worth of work due to the announcement.

“We just couldn’t guarantee that we could meet the new deadline so we had to give back deposits or simply turn the work away,” he explained. “We work closely with Austrian manufacturer, Hargassner, with a boiler manufactured specifically for a particular project and thankfully they pulled out all the stops to get the work we had booked in completed in time.

“But by one minute past midnight on February 29 we lost 60% of our business. It’s a massive blow but we haven’t been hit as hard as most. I know of at least four companies who are simply shutting the doors as they can’t see how they will survive.”

He added, “Around 95% of our customers come through our door because they want to save money and the RHI was a huge part of this. I hope the Government learns from this situation, which was poorly managed.

“We can cope with low levels of grant funding or support but what we can’t deal with is the lack of clarity from Government and the uncertainty they have created. We monitor the performance of every one of our boilers and are in regular contact with customers but we fear that, as other companies close, the required maintenance of systems will be overlooked and we will be back to a situation where renewables are getting bad publicity. We are desperate for a long term strategy.”

That lack of clarity has been highlighted by Michael Doran, Managing Director, Action Renewables, who said that it remains “unclear what the future policy is for renewable energy in Northern Ireland”.

His colleague Mark Compston, Senior Project Manager for Action Renewables, echoed concerns about this uncertainty but said that the industry would continue to lobby the Government.

“The oil and gas industry in Northern Ireland receives Government support and we nwant to see a level playing field with the renewables sector, particularly as there is now no real strategy in place to meet the 2020 renewables targets,” he said. “The concern now is that many of the companies who diversified from oil and gas to move into renewables will now go back to fossil fuels and we will lose that skill base.

“The RHI scheme was a victim of its own success and while no industry wants to rely on incentive schemes like this, we need to work with the Northern Ireland Executive to create a sustainable, long-term plan for renewables that builds on the appetite for this technology.

“We will continue to look at the best practice of other regions, including the success of the renewables sector in the Republic of Ireland, and lobby the Government accordingly. We have an innovative renewables sector in Northern Ireland with people who are passionate about the industry, so we can’t lose that.”

Maria O’Loan, Partner at legal firm, Tughans, said the change was not looking at the wider success of renewables in Northern Ireland.

“This is taking a very short-term view. We have advised some of the leading green companies in Northern Ireland on best practice and have worked on the planning aspects of a number of large renewables projects. In our experience, the RHI scheme significantly boosted the industry and encouraged more people to consider renewables.

“This has created a vibrant indigenous industry with companies carrying out important research and development work. We could now see both the skills and the investment that has created being lost.”

Looking ahead, Maria believes that it is now up to the industry to take the lead.

“Manufacturers, suppliers and installers need to box clever and create own schemes and offer new ways that will allow customers to finance their renewables investment. I understand this could be complicated but given the success of renewables I feel it is an option worth exploring.”

Enterprise, Trade and Investment Minister Jonathan Bell shocked the industry when he announced that the RHI scheme would close on February 29 after a reported overspend of around £30million.

Despite major concerns over job losses in the industry, the Minister was successful in his move to close the incentive schemes down early, with DUP and Sinn Fein seeing off opposition from the other parties to win the Assembly vote.

In his original announcement, Mr Bell said that both schemes had been very successful, with the non-domestic scheme, in particular, seeing“significant uptake during the last 12 months and more so in the run-up to the recent scheme changes introduced in November 2015”.

He added, “However, this increased demand means the available budget for new applications has been exhausted. To meet RHI commitments for existing installations, significant levels of additional funding will have to be found from within the NI Executive’s budget for the next five years to address the current deficit. To prevent further overspend I must bring forward legislation to the Assembly to close both schemes to new applications.”