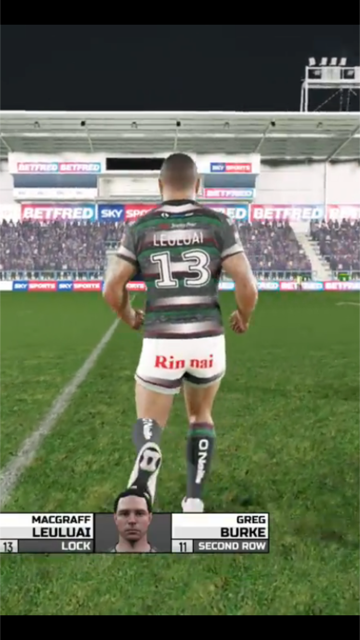 The company’s sponsorship – the Rinnai name appears on the back side of the shorts – is now featured in a video game that is proving a popular success in both the UK and Australia where it has been mass marketed.

“We are absolutely delighted at the amount of media coverage – in print, broadcast and online – that our sponsorship has given our brand name and our range of continuous flow hot water heating units. And now we have a video game that, again, features our name,” says Chris Goggin for the company.

“Rinnai is a worldwide brand name in its field and has taken some major global sponsorships – including the Queensland Reds, The World Club World Cup event held January this year in Tokyo, the World Ice Skating Championships and the US Nascar competition held in Daytona, Las Vegas and other major American venues.

“The Widnes Vikings are also local to our own UK headquarters so it is all an excellent fit. We look forward to working with the team and staff.”

For Widnes Vikings CEO, James Rule, says, “Our business and the success we produce on and off the field is driven by the quality of our people and it has been evident working with Rinnai that we have welcomed into the Widnes Vikings “One Club” family a committed partner staffed by quality people who buy into our vision and who want to play an integral role in moving forward with excellence.”

The sponsorship package has also seen the Rinnai name featured in several live televised games on Sky Sports and in TV shows such as BBC’s ‘The Super League Show’.

For more information on the RINNAI product range visit www.rinnaiuk.com