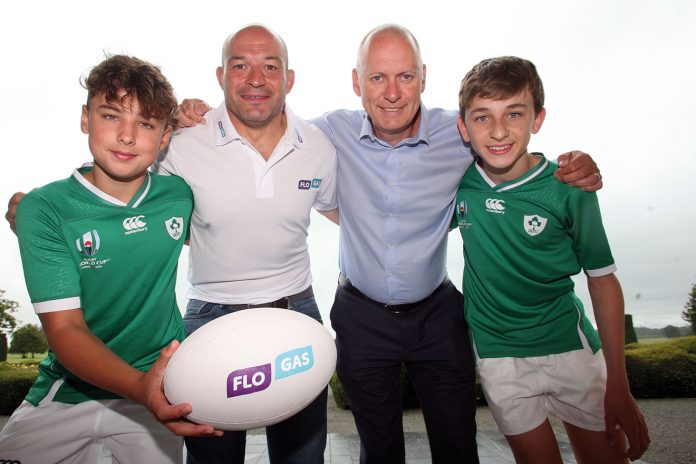 Ireland rugby captain, Rory Best is the new brand ambassador for Flogas, the all-Ireland energy company. The partnership was announced last month at Carton House, Maynooth as Ireland continued their preparations for the Rugby World Cup.

It marks the beginning of a two-year partnership between Flogas and Rory, who will be supporting the upcoming Flogas Home Heating Campaign for 2019-20.

Commenting on the announcement, John Rooney, Managing Director, Flogas, said, “Rory is a fantastic sporting ambassador, and we’re delighted to have him on the Flogas Ambassador team. We’re looking forward to working with Rory over the next two years.

“Success at the Rugby World Cup would surely cap off a wonderful year of Irish individual and team sporting achievements. We wish him and the rest of the team the very best of luck in Japan. Here’s hoping they keep us glued to our seats from now until the Final in November!” continued John Rooney.

Commenting on the team’s prospects in Japan next month, Rory said “Pre- season training has gone really well, so as a group we are happy with how we feel mentally and physically. We will continue to work hard during the warm- up games and prepare fully, to give ourselves the best chance possible in the tournament.”

Rory has recently converted his home from oil to Flogas LPG and he said, “I’m very pleased to represent Flogas as a brand ambassador, as it’s a well- established company that I’ve been very familiar with for years. I’m happy to have made the switch to Flogas LPG in my own home.”

Established in 1977, Flogas employs 200 people at its Drogheda, Belfast and Cork offices. It also operates three large sea terminals at those locations as well as a land-based terminal in Mayo. The energy company is one of the leading suppliers of LPG, natural gas and electricity in Ireland and Northern Ireland.