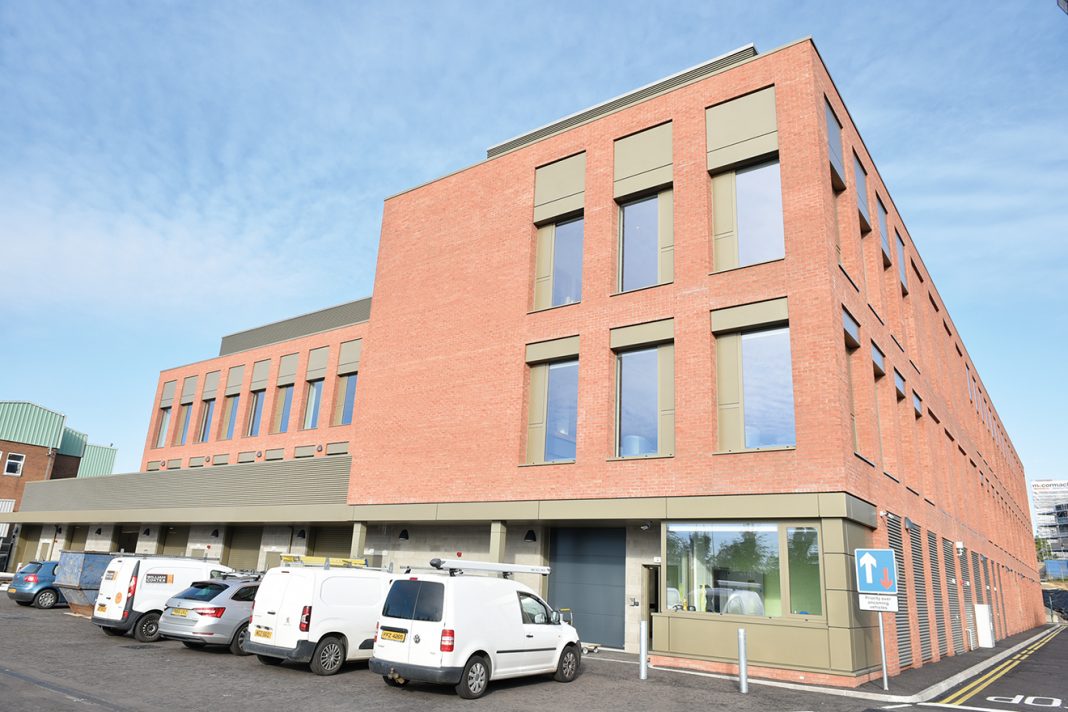 William Coates Ltd was the mechanical contractor on the new Non Clinical Support Building (NCSB) at the Royal Victoria Hospital in Belfast. The Newtownabbey company was involved in the fit-out of the heating, plumbing, soils & waste, air-conditioning, ventilation and steam systems. William Coates Mechanical Contracts Manager, Darryl Casement said the new NCSB raises the bar in terms of attention to detail for buildings of this nature.

“Personally, I was very proud to be involved in this project,” said Darryl. “This was an excellent piece of work from the team at William Coates.

The NCSB is one of a number of enabling and construction projects designed to rationalise the RVH estate to provide a footprint for the proposed new Royal Belfast Hospital for Sick Children. Level 0 of the NCSB is accessed from the lower levels and the main service yard area contains: staff facilities including offices, lockers and toilets. Also on this level are the HV plant rooms, comms room, mechanical plantroom, LV switch room, workshops for joinery, mechanical and electrical, welding. Finally, on Level 0 there are PALS storage areas, clean/dirty goods storage, service corridors, tug storage. Level 1 is primarily office accommodation which is accessed from Spine Road and via a separate Level 1 entrance.

The site of the new building occupies the site of the original estates office building which was demolished in the Spring of 2016. The soils & waste system installed by William Coates Ltd was a Geberit fuse and weld drainage system.

The plumbing system was a fully pressurised system with a dry riser installation. The heating system delivers constant and variable temperatures while the airconditioning has three aspects to it – an air-handling unit (AHU) which is ErP 2018 and HTM compliant, the second aspect was the welfare extraction system and, the third, was the specialist extraction for fumes and dust. The 3D design and co-ordination for this job began back in November 2016.

The mechanical and electrical drawings were drafted for approval, at which stage potential bottlenecks and clashes were identified and worked through with the contracting team – Felix O’Hare & Co, JD McGeown Ltd and William Coates Ltd.

“There was a lot of collaboration between the three teams in order to avoid or indeed overcome any issues,” said Darryl. “We had weekly meetings to ensure the smooth running of the project – all three teams have a lot of experience of working on healthcare projects which have their own policies and procedures specific to the high standards demanded by the client. The NCSB is the nerve centre of the Royal Victoria Hospital and is critical to the running of the whole RVH estate, therefore the work had to be completed to a very high standard.”

An example of just how critical maintaining services is during the construction of healthcare buildings came when William Coates was tasked with providing a temporary plant compound. The steam and oil-fired temporary plant rooms were to serve adjacent buildings to the NCSB during the demolition and groundworks stage.

“Taking a step such as this underlines the fact that when working on healthcare buildings you are never far away from life- critical aspects. It was important there was a risk-assessed back- up plan in place,” said Darryl.

Another example of the high level of workmanship demanded on this project is the fact that all welding was completed to Class One standards. The handover process was a four-step process which was extremely thorough and robust. All aspects of the mechanical fit-out were tested and commissioned individually, often before they left the factory. They were again tested onsite with any tweaks and fine-tuning taking place immediately.

It was essentially a soft landing as opposed to a handover day with any problems then being ironed out. All the continuous testing and commissioning work was witnessed by the contracts team – this included all areas of the project and at every juncture. It had to stand up to the closest of scrutiny.

Once everyone was satisfied with the testing and commissioning the process moved to the next stage which was demonstrating the new systems.

The rigorous demonstrations were carried out in front of Belfast Trust representatives with the findings logged with the Building Management System (BMS). The third stage of the handover process involved the full on performance testing of all systems operating in unison. This process continued over a continuous three-week period.

“The commissioning process is all about discovery,” said Darryl. It’s important then to be able to tweak any issues or tailor the systems to the client’s preferences. Really, the performance testing is a victory lap – everything should be in place by this stage.”

And that is what the performance testing at the NCSB proved to be – a victory lap for the team at William Coates Ltd.

The performance testing was monitored with the BMS as well as independently at 13 specific locations. Each week the data was uploaded and shared with the teams who evaluated the results.

The final stage involved the training on all systems of the estates staff who would be using the equipment. All staff were also trained in emergency and maintenance procedures and the Fire Brigade was brought in to give them an overview of the building and systems in the event of an emergency.

The BMS also provides monitoring of air-conditioning systems in the IT suites and communications rooms, sending emailed notifications to the client should an issue arise with the environmental control within these spaces. The same email on alarm facility is provided for the UPS system and the site generator.

An air handling unit (AHU), also under direct control of the BMS, ensures desired temperatures and pressures are maintained throughout the building’s offices and workshop zones.

As part of the commissioning process the eBCon controllers were brought online to the Belfast Trust’s estate wide enteliWEB BMS software providing a graphical interface and alarm management system to route critical alarms to estates staff.

Coral Environmental were engaged by William Coates to carry out the pre-commission cleaning, system chlorination and chemical treatment of the new Non-Critical Services Building at the RVH.

Witness sampling, satisfactory analysis results and compliance certification led to a successful completion and handover in the agreed time frame and cost.