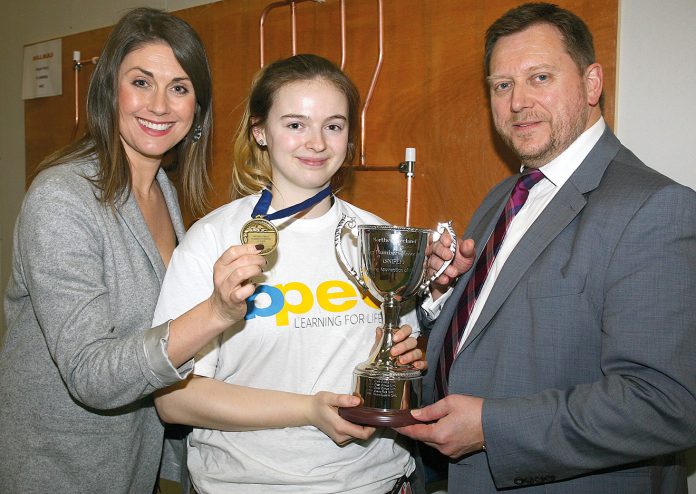 Alevel 2 student at Northern Regional College, Abigail Reilly came out on top when she competed at the annual SkillBuild competition, held recently in Belfast. The SkillBuild NI competition is designed to test skills, technique and ability within tight timeframes in order to win coveted titles in 10 different trades ranging from brickwork to wall and floor tiling. On the day, Abigail was up against 10 other competitors in a four hour task that required intense concentration and endurance. “I had taken part in the competition last year so I knew what was required. I knew I had to be quick; stopping at all would mean losing time and I needed every second to complete the task. Last year I came third so I was absolutely delighted to win it this year,” said Abigail.

There are just two female apprentices on the plumbing apprenticeship course at Northern Regional College. Abigail’s success will, says lecturer Paul Carey, help dispel the myth that plumbing isn’t a career for women. “Abigail was the only female in the SkillBuild Competition this year. It’s a great achievement for the college in that one of our students has done so well but it’s also great that a female has won it. It just goes to show that plumbing isn’t a male dominated industry anymore. Women are coming through all the time and they’re more than capable of matching or performing better than men.”

There’s no doubt that the plumbing industry can still be a daunting environment for a woman. “We initially had four women on the course but two dropped out. I think women sometimes don’t realise how physical plumbing actually is. It can be quite a difficult industry for a woman as it’s quite male dominated and you need to have a certain mentality to cope with the men on site.” The fact that Abigail’s father is a plumber has been a plus. “That certainly helps. Jessica, the other female on the course, is also from a plumbing family so that familiarity with the industry is a big advantage.” That’s not to say that every woman interested in a career in plumbing will have that advantage but times are changing, says Paul. “The industry is definitely becoming more inclusive. I think we’ll see more female plumbing apprentices in the coming years. I’ve noticed that females tend to be that bit more studious; they pass their exams with a higher grade and they generally apply themselves a bit more. Abigail is a very determined person, she loves the competition and she wants to beat the boys! I’ve no doubt she’ll go on to bigger and better things.”

Once the regional finals across the UK are finished, Abigail will find out if her score is high enough to advance to the SkillBuild UK National Finals in October. “I’ll find out in September if I’ll be advancing to the finals in Birmingham. I really hope I make it but I don’t want to get my hopes up too high! In any case, I’m delighted with my success so far, it’s been fantastic,” said Abigail.