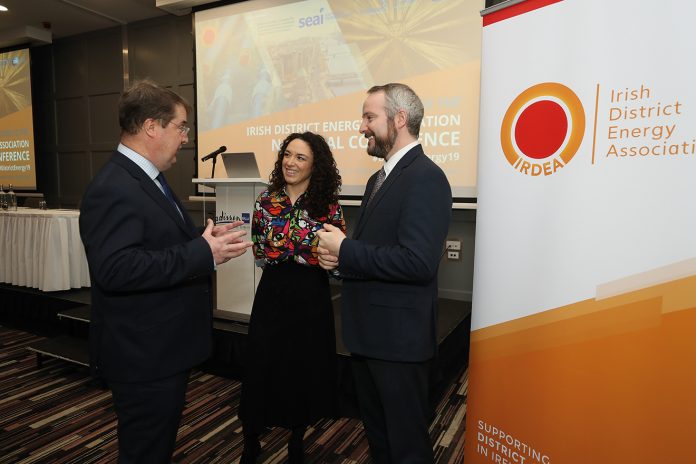 There was a great reaction to the Irish District Energy Association’s first national conference, which was held on the 12th April in the Radisson Blu Royal Hotel, Dublin. The conference, which focused on discussions around developing district heating in Ireland, had a full house of attendees that included engineers, planners, local authority staff and representatives from the energy sector at home and abroad. One of the main findings from the day came from Dr Bernd Moeller, who presented the results of the ‘Heat Atlas for Ireland’ study. The study found that up to 57% of the country’s total heat demand could be covered by district heating networks, if the necessary government regulations were in place.

Donna Gartland, CEO of IrDEA, also told attendees that there is enough waste heat in Dublin to meet all heat demands in the capital. This is worth more than €1.2billion and district heating is the only practical way of making use of this indigenous resource.

The conference also heard from the Department of Communications, Climate Action and Environment and the Sustainable Energy Authority of Ireland. Attendees also heard from international organisations such as the Danish Board of District Heating and Nordic Heat. Eddie Conroy from South Dublin County Council gave an update on the Tallaght District Heating Scheme, which is due to start construction later this year, along with Victor Coe of Dublin City Council on the planned Dublin District Heating Scheme for the Docklands area of the city.

District heating is a network of insulated pipes that delivers heat from a central energy source to provide space heating and hot water to the buildings connected to the network. It has the flexibility to combine multiple locally-available, renewable and low-carbon heat sources and it can also recycle heat produced from activities such as electricity generation or industrial processes. Ireland currently ranks as one of the lowest countries in Europe for generating renewable heat; countries with the highest levels have achieved this through the use of district heating networks.

Speaking after the conference, CEO of IrDEA, Donna Gartland, said, “I am delighted to see such a full house for IrDEA’s very first national conference. This level of attendance shows a real interest in exploring how district heating schemes can be developed in Ireland and hopefully this conference has taken us one step further to their implementation nationally.”

IrDEA was set up by Dr David Connolly and Donna Gartland in 2017. It is the only trade organisation representing the district heating and cooling sector in Ireland.

For further information, including conference presentations and details on the ‘Heat Atlas in Ireland’ study, visit www.districtenergy.ie