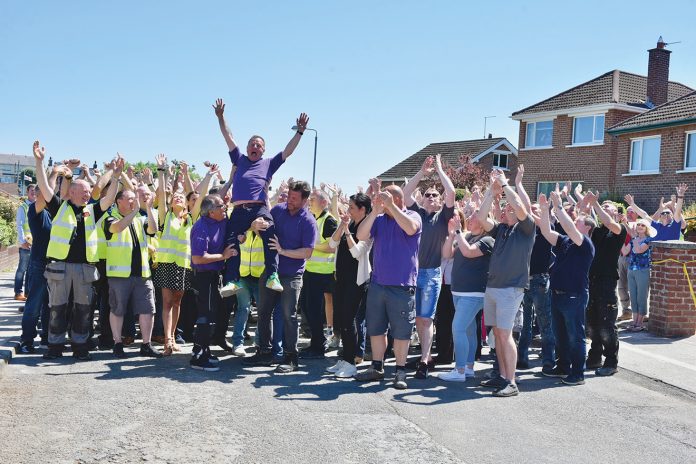 “There were 350 very proud people working on the DIY SOS Bangor project but I was by far the proudest.”

DIY SOS Build Manager, Mark Millar is originally from Bangor but, with the Troubles raging, he left home 35 years ago to seek a better future.

But his homecoming ended in triumph as the programme received one of its biggest ever responses to their calls for help as they completely reconfigured the home of the McCreight family. With mum Mandy spending around 80 percent of her time in her bedroom due to health complications, the family spent large amounts of time apart despite living in the same house.

An emotional Mandy thanked everyone of the trades people and suppliers after presenter Nick Knowles revealed their new home to the McCreights on Thursday June 27.

Mark Millar then addressed those who had worked on the build praising them for their ‘incredible support.’

“I got married on the Friday before we came here and I was gutted to be leaving my new wife,” said Mark.

“But I have been blown away by everyone who has turned up, the support has been incredible. You are the most amazing community.”

Mark, was born in Belfast but his family moved to Bangor when he was young. However he moved to England and is now based in Bristol having worked all over the UK, Europe and U.S. as a carpenter.

“I have come back to Northern Ireland after 35 years for this build not really knowing what was going to happen,” said Mark.

“Back then I was looking for a future elsewhere but to come back here and work on this project with so many loving people has been amazing.

“Our builds are carried out by very skilled tradespeople who want to give back to their community – they give more than you could ever imagine.

“The all-round level of craftsmanship I have witnessed on this build has been amazing, the quality of work has been second-to-none.

“We have had joiners, plasters – every member of the trade on this project and I cannot fault them, they have worked so diligently.

“It has been fantastic and I am just so proud of the tradespeople of Northern Ireland, they are the real stars of this show and I would love to come back here and do another build with them.”