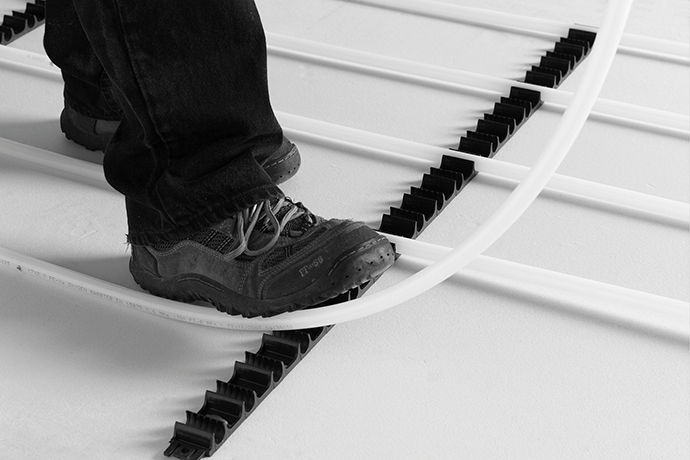 We can now site hydronic underfloor technology almost anywhere, on upper floors and in existing properties, as well as in new builds.

However, underfloor isn’t only used in isolation. Around 30% of the project enquiries that we receive involve the use of underfloor heating in combination with other technologies such as radiators.

It has become very commonplace to install underfloor on the ground floor while radiators are often chosen for the upper floors.

Underfloor heating allows the end-user to use ready sourced single room packs which provide the installer with everything they need to install a screed floor hydronic underfloor system in one purchase. This is a cost effective and simple solution to getting a single room equipped with underfloor and is also proving popular for extensions and conservatories.

However, new build is certainly not losing any ground as developers are starting to consider underfloor more frequently as a routine option. Underfloor heating is easier to install in solid or screeded floors which are mostly found on the ground floor, often in new build properties. Hydronic pipe is laid in a looped pattern on insulation above damp proof and protective layers which cover the sub base. The pipework is anchored using a suitable anchorage system such as Myson’s Tackernail fixing system before a screed is laid over the pipework to complete the installation.

We also have an option for the floating floor which has a low thermal mass and a swift response time to changes in temperature. Here, the hydronic pipework is laid in an aluminium diffusion plate within grooved extruded polystyrene panels, with the grooves spaced at 200mm intervals and pre-grooved turning channels for the pipework. Retrofitting hydronic underfloor heating is now much easier thanks to a thin 18mm thick Microboard which carries the hydronic pipe, such as Myson’s PexCellent pipe.

Some of the biggest technological advances over the past few years have been in the efficiency of pumps and in advanced controls, such as Wi-Fi and Touch controls. Myson’s Touch 2 Wi-Fi controlled thermostat includes geo location, smart start technology and 24/7 programming.

It is now far more possible to install underfloor heating on upper floors, but not everyone will want that, so there is a good chance that underfloor heating will be part of a total solution for many customers. It is wise to source your other heating products as well as your underfloor heating system from a manufacturer which provides and understands other forms of heat emitter and how they can work successfully with underfloor.