When you embark on a commercial washroom project, whether for a gym, hotel or other public spaces, the components you select will have an impact on overall user experience. A balance between hygiene, comfort, aesthetics and budget needs to be found. However, a component sometimes overlooked – but is essential to user safety and comfort – is the Thermostatic Mixing Valve (TMV).

Consideration must be given to what type and classification of TMV is used for the application in question.

TMVs are used to blend hot and cold water and to maintain this at a set constant outlet temperature. This ensures safe and comfortable hand washing, shower and bath temperatures and significantly reduces the risk of scalding.

There are two classifications of TMV that could be used in a commercial washroom setting, each used for applications with differing regulations: TMV2 and TMV3.

TMV2 valves are designed and tested to be used in domestic environments in order to reduce the risk of scalding at home and in other domestic type settings. In 2010, the TMV2 scheme became part of the British building regulations to control the temperature of hot water to a safe maximum in domestic bathrooms, specifically for baths and bidets. The regulations apply to all new build domestic properties in the UK, along with homes where bathroom renovations are being undertaken involving any movement or replacement of bath, bidet or shower outlets.

The WRAS approved Mixcal III TMV adheres to all the necessary requirements outlined by the TMV2 scheme, effectively maintaining a constant and safe temperature. The Mixcal III has been designed especially for centralised or group systems, which demand high flow rates, for example with multiple outlets such as showers and washbasins.

The TMV3 scheme applies to thermostatic mixing valves for use in high-risk commercial healthcare applications within the UK. These valves offer a high level of protection, reacting much more quickly in shutting off the flow of water if the cold water fails, or a safe temperature is exceeded. Testing bodies must ensure that the valve adheres to the NHS D08 regulatory standard, which provides stable temperature output despite varying supply pressures and temperatures.

The WRAS approved 5213 Merchant TMV is TMV2 and TMV3 compliant. It has been specifically designed and manufactured to meet the requirements of the latest NHS model engineering specification – D08 and BS 7942 for use in care homes. This versatile TMV adheres to both TMV2 and TMV3, making it suitable for both domestic and commercial applications.

The recommended temperature range for delivery of safe hot water where a TMV is installed is: 39C to 43C. The maximum mixed water outlet temperatures for both TMV2 and TMV3 valves are outlined in the table below: 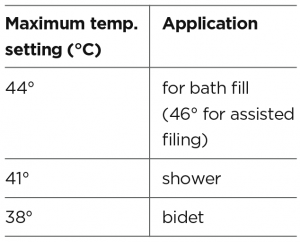 The conflict between delivering water at safe temperatures and fighting off harmful legionella bacteria should always be taken into consideration with TMVs.

bacteria, which can be extremely harmful and even fatal if exposure occurs. As TMVs allow for high-temperature water storage, the risk of bacterial growth is reduced. However, it is not eliminated altogether.

The location of the TMV plays an important role here. Any space between the TMV and outlet where blended water is stored provides a breeding ground for such bacteria. For this reason, it is recommended that:

• TMVs are installed as close to the water outlet as possible, mixing water at the point of use where possible

• Multiple TMVs should be used in the case of multiple outlets; the use of a single TMV increases the risk of bacteria growth.

Overall, it is essential that we consider what level of safety and performance is needed within both domestic and commercial settings, whether it is TMV 2 or TMV 3. The Altecnic range of TMVs is designed for high flow rates that group applications require, and are guaranteed to meet the requirements of the relevant TMV scheme.

Altecnic, the UK’s leading supplier of hydronic solutions and part of the Caleffi Group, has expanded its product range once again with the addition of the highly anticipated SILFRA Commercial Washroom range. The range embodies the typical high quality associated with the Altecnic brand, bolstered by the SILFRA 5-year warranty.