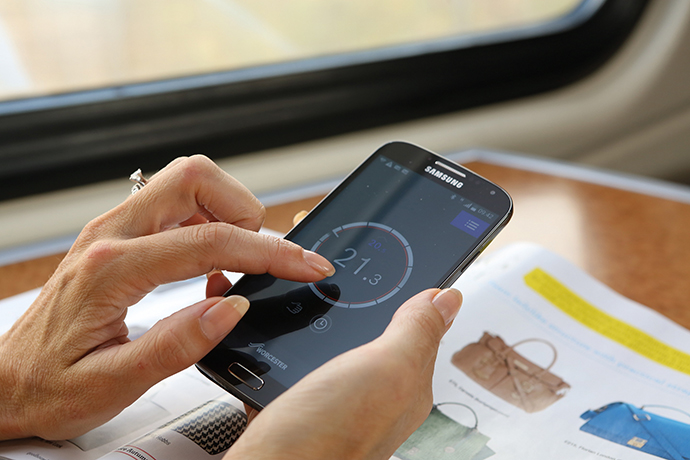 As an increasing number of home-owners look for a way to manage their heating systems, thanks to their lower price tag, plug-in smart controls made by a company other than the boiler manufacturer are gaining traction. However, installers should be aware of the risks of recommending these cheaper alternatives.

In today’s market, the term ‘smart’ tends to be used to describe a piece of technology that is able to connect to the internet or be controlled remotely using a smartphone. However, for a control to be truly smart, the ultimate aim should be to make it much simpler for the end-user to maximise the performance of their heating system – whether it be through automatic or manual adjustments – rather than merely being able to alter the heating temperature while on the move.

Built-in elements, such as load and weather compensation, can adapt the flow and return temperatures of the boiler, ensuring that it condenses as much as possible and lessens energy consumption, whilst still delivering the required room temperatures. With these features, controls such as the Worcester Wave are able to maximise the performance of the boiler to offer potential energy savings, as well as savings and improvements in efficiency that are recognised both in SAP and the ERP regulations. Third party controls are normally just an on/off control and unable to access the intelligence of the boiler PCB to modulate the boiler accordingly.

GUARANTEE YOU’RE COVERED
It is important for installers to be aware of the implications that fitting a third party control can have on a warranty, as in most instances control manufacturers do not have a field service department to attend call-outs. They may also find that the boiler might not be eligible for an extended warranty, if a device made by someone other than the manufacturer is fitted. Also, if the boiler manufacturer attends the call-out and finds that it’s the controller rather than the boiler which is at fault, then they may charge for the abortive call.

Should any issues occur with a non-accredited control, it’s likely that the end-user will be left frustrated with a system that doesn’t work, whilst the installer is left to find out who is going to repair the controller that is at fault, or incur the extra cost of having to replace the controller themselves.

SAFE AS HOUSES
As more and more people become conscious of how their data is stored, manufacturers of internet-connected devices have a real responsibility to ensure that any usage patterns collected by a controller are safe and kept within the device.

A recent report by Which? analysed the security of information within these devices, finding that not all manufacturers who claimed to encrypt details, such as a person’s postcode or living patterns, had successfully done so. This meant that information like a home-owner’s daily habits and when a home’s device has been switched to holiday could be accessed by a third party and would-be burglars.

The convenience of being able to operate the heating system whilst on the move might be seen as smart by some – but providing customers with the most useful features for them is where installers can really add the most value. The key is to make sure that whichever control is ultimately chosen is safe and contributes as much as possible to the overall efficiency of the heating system.